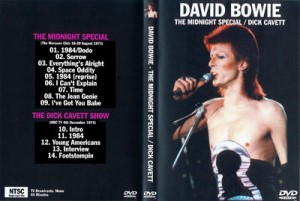 It’s surprising that one of the most cherished of all of David Bowie’s American TV performances hasn’t been posted to YouTube in better quality—pristine digitally-sourced bootlegs are easy to find that even include outtakes as DVD extras—but this truncated version (which cuts off the dancers forming the show’s title and omits most of the guests) for now, is as good as it gets. (It’s also surprising that Bowie himself hasn’t seen fit to release it on DVD, but apparently he doesn’t really like it that much.)

Taped in the tiny Marquee Club on Wardour Street over the course of three days in October of 1973, the idea was to do a sort of artsy/futuristic variety show with Bowie’s first performance since “retiring” onstage at the Hammersmith Odeon earlier that year. The 1980 Floor Show featured guests Marianne Faithfull (junked out of her skull and dressed as a nun dueting with the Dame on “I Got You Babe), The Troggs and Spanish flamenco glam act—yes, you read that correctly—Carmen. Amanda Lear introduced some numbers and Bowie serenaded her with a magnificent version of “Sorrow” in one of the show’s highlights.

The 1980 Floor Show was originally aired on The Midnight Special on November 16, 1973. I didn’t see it the first time it ran—I was but seven years old then, so being up that late was not much of an option for me—but by the time it was repeated the following year, I was already a budding Bowie fan and owned the 45rpm of “Space Oddity” and the “Rebel Rebel” single (the ultra loud US-only alt version that was quickly withdrawn).

To say that The 1980 Floor Show totally blew my young mind would be an understatement. I simply could not believe what I was seeing. It all seemed so glamorous, so smart and so cool. And this Amanda Lear character, she was really pretty, but what was she?

Yes, indeed, 1974 was an excellent year to discover David Bowie. I was able to consume Diamond Dogs shortly after it came out, the back catalog up to that point (The Man Who Sold the World was probably the second album I got my hands on) and then came the steady parade of towering artistic genius that was Young Americans, Station to Station, Low, Heroes and Lodger. During the 1970s, Bowie was touched by the gods. Like The Beatles, Bob Dylan and The Rolling Stones had in the previous decade, it was like he was holding live wires in his hands, his body channeling the electricity of his age and creating a cultural feedback loop that he also benefited from artistically. Bowie’s influence cannot be overstated. It’s only fitting that his life’s work is now the subject of a major museum retrospective. It’s a justly deserved honor.

In my never so humble opinion, David Bowie was perhaps the single most important cultural avatar of that entire era. The man could simply do no wrong… well, at least up to Let’s Dance…but on to the The 1980 Floor Show, shall we?.