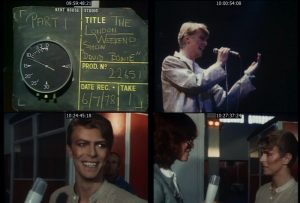 David Bowie 1978-07-09 The London Weekend Show ((Full Show from the master tapes) Made by LWT Television and presented by Janet Street Porter.
(5/5)

This five minute interview with David Bowie by Janet Street-Porter was filmed backstage at London’s Earls Court arena, literally minutes before he went on stage.

Shot by London Weekend Television, the interview was included in their David Bowie Special broadcast the following week. Janet Street-Porter tells her story:

In June 1978, I was presenting a television show for young people when I got a call from David Bowie’s PR to say the living legend had decided I should interview him. He’d watched one of my music documentaries, and was impressed by my lurid dyed burgundy hair ñ a style he’d sported in The Man Who Fell to Earth.

I was told to present myself backstage at Earls Court, an hour before his show. We met in his dressing room, where he was completing his preparations. After a preliminary chat about friends in commonÖ with a capacity crowd screaming their heads off, we were filmed walking together right to the point where he stepped out in front of the crowd.

“I had about twenty minutes of his undivided attention, with no retakes. Bowie showed no nerves, just extremely good manners. “Heroes” became my anthem for over a decade.”