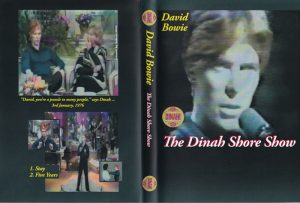 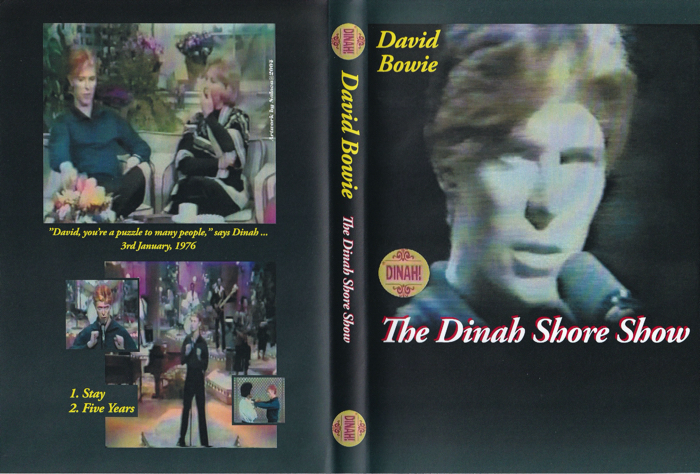 THE DINAH SHORE SHOW audience is a mixed lot – housewives with blue hair who wait in line to be a part, somehow, of Hollywood “show business”, and more teenagers than usual.
The warmup man leaps out in bright orange turtleneck sweater and beige polyester leisure suit, and hits us with the rap: “We get some nutty audiences on this show, folks … We want you to scream, applaud, do your own thing … Just got back from Lost Wages … yuk, yuk, yuk … “‘
“Didja see Day-vee?” shrieks a maniac blond groupie.
(“Angela wanted to be here,” whispers the publicist, “but she’s home cooking for a dinner party they’re having later with Alice Cooper and Ray Bradbury.”)
“And now – here’s someone considered by many to be one of the most influential people in the rock spectrum!!!”
Pix flash on the screen – the Ziggy patterned jumpsuit, the long striped sock, the pink jockstrap, the white suit. About 50 teenagers in the audience scream as a screen is raised and There He Is.
David Bowie sings Stay and out of camera range, co-hosts Nancy Walker and “Fonzie” Winkler tap their toes. Bowie does little disco steps, looks great.
The song over, he sits down with Dinah to “rap”.
Dinah: “How do you feel when you hear those screams?”
Dave: “It’s my drummer, actually… ”
More photos of our boy flash on the screen, big white suit, red suspenders blue and white polka-dot sweater. Dinah elicits remarks from David: “Oh that one, I was living in New York at the time and was influenced by a lot of Puerto Rican clothing steal from everybody, you know.”

COMMERCIAL BREAK Switch to Bowie on the cone sipping tea with Dinah, Nancy and Fonzie. “I have never seen David perform before.” Nancy Walker says earnestly. “He’s beautiful. But you know I was brought up on Cole Porter, Rodgers and Hart… ”
“Hoagy Carmichael,” David offers.
“David, you’re a puzzle to many people,” says Dinah “There are a lot of David Bowies – but is there really only one David Bowie?”
“Well, I started as a painter,” Bowie replies, “but I was a natural ham. Rock and roll is superb way of releasing that. I still act the songs rather than sing them. If the French can get away with it, I figure so can I.
“It’s the policy of the self-invented man,” he continues. “You strip down all the things you don’t like about yourself. One thing I didn’t like was being very shy. If I gave myself an alarming reputation, then I’d be faced with defending it.”
Dinah: “You know, David, we all often do interviews and put people on, but I read where you said — and now I’ve met your lovely wife Angela – you said ‘I’ve never been in love, thank God’… ”
David: “I have a vast capacity to love, but the one time I found myself falling in love it was obsessive in a way. The thing about putting a person on a pedestal, it’s like what people search for in God. ”
“You’ve said,” Dinah continues, “that if you were an original thinker, you would not be in rock and roll.”
“Oh yes,” smiles David.
“But rock and roll has been very good to you,” she says.
“I’ve been good for rock and roll,” he says.