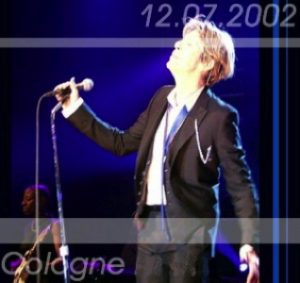 The Taper convert this tape a few days after the show to CDR and unfortunaly he lost the original tapes,so the CDR copy is everything what he have from this great show.
He never want to upload this tape from the “Secret gig” in Cologne,but “Never say Never”.
The music is fantastic,a suprising setlist and the quality is very good,sometimes you can hear the crowd and some clapping from the people beneath me.
The last song fades out and has some digi noise problems that I can not fix,so take it as it is.

Chaos and anger about the distribution of tickets were the main issues weeks before the show took place at the very intimate E-Werk in Cologne. For the commmon customer it was almost impossible to get tickets at the box office. It was said only 1200 tickets were sold to the public for the only summer performance in Germany, which led to many offers at ebay. But those who paid up to 200 were not to go home dissapointed.
….After a look at the setlist of recent shows I didn’t expect a show like the one I had experienced in London, but a similar mixed set as he did at each show after his Meltdown performance. Many well known old songs, some pieces from “Low” and many great songs from “Heathen”. And with a little exception I was right. To the familar sound of Mike Garson’s piano, Bowie went slowly on stage wearing his black suit with blue leather tie to sing “Life on Mars?” beautifully as ever. What a magical moment. Bowie’s hair was throughout the show tousled by ventilators which was a very joyful view. His fantastic and loose mood was absolutely matched by the audience’s, who seemed to enjoy each and every moment of that concert. After “Slip away” Bowie started playing a funny childish melody on the stylophone in which Mike Garson joined in immediately. A moment that characterizes the show and Bowie’s general performance style this year. Open, loose and chatty. During a very lenghty band intro he asked Gerry Leonhard if he know the irish “dance like a river” (aka “Riverdance”) show. Yes he did and so he started to dance like Michael Flatley. Not that close to the original but another very funny moment.
….When they returned to the stage for the encores Bowie confronted the audience with “some bad news” becauce “the doors have been locked so noone can get out”. And off they went to play “Everyone says “hi””. Parts of the concert were filmed (only songs from “Heathen”) and one camera had problems during the song, so it was played another time after “Let’s dance”. The audience didn’t mind. And nOt only because “They still” couldn’t “get the doors open”. “And Ziggy played guitar” brought the show to a close. So we thought after Bowie and his fantastic band had left the stage. Some hardcore fans were already out of the venue as something very surprising happend. David and his band returned to stage. “Good evening. Good to be here”. And the second encore began.”They still can’t get the doors open” we were informed by the man. “We don’t really know what to do, so we thought we could play the “Low” album.” And with deep voice very slowly: “The doors are locked.” Many people around considered it a joke, but then Bowie and his musicians began to play “Warszawa”. One could only watch the stage, eyes and mouth wide open, and see them play that great music again. The bewildered audience got quiet and really listened to the music. What an awsome moment never to forget. “Low” was played as it was in London – not in correct order and without “Weeping wall”. After a very calming “Suberraneans” it was really over. What a show. What a performance. It was the best example for Bowie’s greatness. Expect the unexpected. After another hour talking to other enthused fans I started my 200 km ride home. I never felt so exited and good after a concert. Fore sure one of the best shows I’ve ever seen. From Florian

This show took place in a very small venue, only 2,500 people and it was sold out immediately. Bowie was smiling and laughing all the time, and during the encores he announced that the doors would be locked so that nobody could get out (and only unlocked after the performance of Low).
….On 11th July Bowie was in Cologne in the ‘Harald-Schmidt-Show’. That’s the German late night show, and Bowie talked with Harald Schmidt (in English, and they broadcast it without any translation) and performed Everyone Says Hi live with the band. Interesting enough that they didn’t play Slow Burn which was the single at the time.
….On 5th October Bowie is going to be on the ‘Wetten Dass’ Show in Kiel.
Info from Andrea