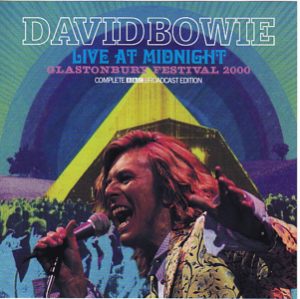 David Bowie memorial S & V Archive Collection Series News Edition CD title latest emergency available from! Complete recording appeared in a live 2016 BBC Radio latest digital remastered full version on the basis of the broadcast master of the 2000 Glastonbury Festival will be the first! ! “Best Ever Moments” and the critically acclaimed stage of this day is now that waged an impassioned performance in 71 years since the long hair is reminiscent of the young figure of the time at the same festival appearances for Bowie’s own legend live. DJ “Let’s Dance”, and the like set list also its part in the attention has also been radio and TV broadcasting from that time, but this time from the opening until the last of the rare as a live showcase of this period “Absolute Beginners” and throw Arrangements first songs complete recording of a long BBC master sound source than the actual broadcast without even entering talk. Sound quality is also also included two songs that have been unveiled only to the back piano YAHOO Music Awards in the same year New York as a bonus track in the perfect quality of undisputed. Mast item of permanent preservation by 2CD press platen. It is the emergence of large moved to tears recommendation title definitive edition of the now again impressed!