Queenbitch;”Hi,good evening.Good to back in Budapest.Suck on this”
Waiting for the man:“Sung by a man that was an influence on the song.This one.” 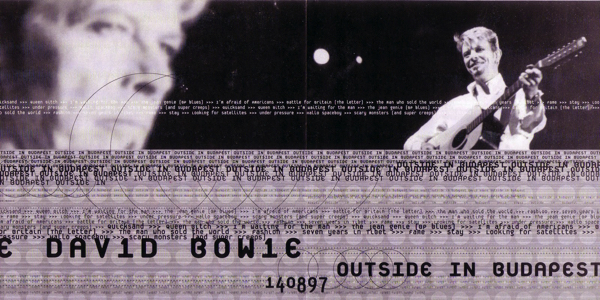 Here, the new song “Battle For Britain” finally appears (“I’m Afraid Of Americans” is a song recorded as “Earth ring”, but it is a retake of songs already announced in 1995). It is trying to faithfully reproduce the digital sound which is the feature of the album “earth ring” such as piano solos and driving electronic sounds inserted between them. For the ending it is finished with a piano playing the “Time” introphrase that would be a fan service. “The Man Who Sold The World” is one of the things to listen to as a bold arrangement just as an old song. With the sound of a guitar somewhat oriental sounding back, it is showing off in a form close to a cappella based on a rhythm track. “Fashion” is a piece of music that seems to have affinity for arrangement of this tour, among past songs, but contrary to imagination it is even funkier than the original. Then again the new song “Seven Years in Tibet”. The film of the alliance title has been released in 1997, but the bowie is a song inspired by the original regardless of the movie. “Fame” has been given a strange intro, first noticing that it is “Fame”. Beginning with strained guitars and heavy riffs, this is also reborn as a bold arrangement. It seems that the performance is daringly going forward without doubt. The same also applies to “Stay”, an intro of electronic sound is given, and then it is arranged to be superimposed with familiar guitar riffs. A digital atmosphere that covers the whole is interesting. “Looking For Satellites” is also a new song.
>info from GigInJapan