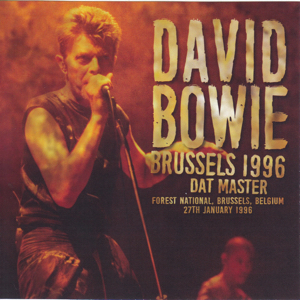 This is a panoramic view of “OUTSIDE TOUR”. The tour will start around the album release, but paused in February 1996. So far, it was a large group of eight people, but here three people, including allies Carlos Allomer, withdrew. It has been reopened from the Japan tour in June to form a five-man formation. The Brussels performance of this work was the concert which is the 7th performance of “Europe # 1” which is just before that.
The record of this show has not been known for a long time, but a master has recently come to defeat that situation. That is this work. Moreover, the quality is excellent again. It is awakened from the original DAT master, and it is super clear anyway. I understand that the audience recording also absorbed the enthusiasm of the site when I listened in the headphones, but the enthusiasm is far from melancholy, and the loud playing sound and singing voice come to the front in front of me. Moreover, the air feel is crystal clear. I do not hide any details, even though the halls are not totally absent. Even though it is a large group of eight people, it separates beautifully, and it is as beautiful as an FM sound board.
In fact, this clear is only for this work. The excavated DAT master itself has also been acclaimed by the core collectors of the world with amazing sound and “A” and “9/10” and so on, but this work is brushed up with even more careful mastering ing. Organize the bones and thick sounds and wipe out the elements that you can feel when you listen to one. The beauty of the sound and the natural feel were kept, but I pulled out the sharpness of the edge that the original sound had.
The show drawn with such a superb sound is also great. Speaking of the first half of “OUTSIDE TOUR”, we have introduced soundboard sound sources such as the rehearsal album “SLINKY SECRETS (Wardour-230)” and “DUBLIN 1995 (Uxbridge 934)”, but they are all from 1995 . This work is “Europe # 1” which went one step from there, and a set also changes. Of course, the axis is the new song group of “1. OUTSIDE”, but there are revivals of classics such as “White Light / White Heat” and “Diamond Dogs”. Both are set from “Europe # 1”, but “Diamond Dogs” is particularly delicious. It is the first resurgence in 20 years since “ISOLAR: 1976 TOUR”, and the delights of the unforeseen audiences can be felt (while far away) well.