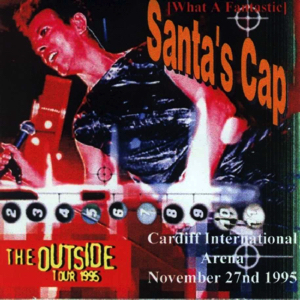 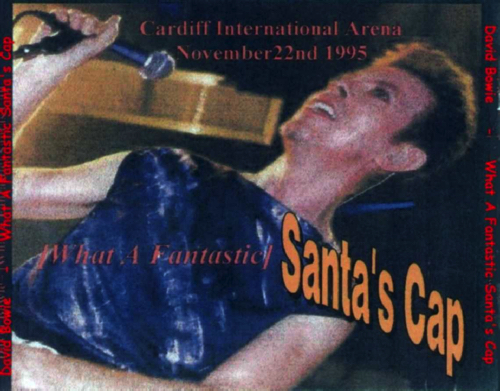 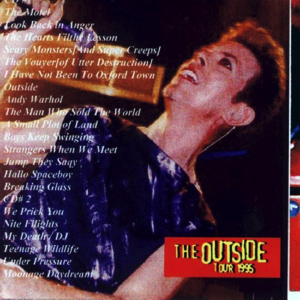 REVIEUW Steveboy
The day had arrived Bowie playing Cardiff my (Steveboy)home town again. Having met up with my best mate DT we drove into Cardiff Town centre very early must have been around 9:30am just to see if we could get a glimpse of the man himself, the chances were minimal as opposite the Cardiff International Arena is a massive Jury’s Hotel which has a tunnel straight into back stage of the Arena, and that’s where most bands stay on the day.
We waited outside the arena at the entrance we were due to enter later that day and met up with a few other friends and talked about Bowie and the show’s we had already seen, one mate had been to see the Toronto show. I and Dave had already done two trips to the Birmingham NEC where we met up with Gary Parker who was carrying a box of his homemade CD-r’s namely ‘Teenage Daydream’ at that time I think he was selling them at £25.00 and sold the lot.
We hung around the arena till opening time [pub opening time that is] and had a few bevies, I was buying drinks for my mates sister who was under age she was pissed by the time I left with my trousers soaking, having had beer spilt all over them by her !!!!!
I decided to make my way home for an hour or so to change the wet trousers and sober up a bit also re-charge the DATs batteries as they had been in the car for a few hours, I wanted to get the complete show as the batteries had run out during both Brum shows, so no mistakes on this one.
So I made my way back into town parked up again this was about 5pm, doors were due to open at 7:30 I think.
I met back up with the same group of people my mates sister was still pissed but did sober up a bit before we went in to the arena. There had been no sign of Bowie or the band so I hadn’t missed anything.
Just before the doors opened I split up the DAT equipment Dave had a battery and blank tape, Matt had the other battery his sister the mic and me the DAT machine. Now this Sony D3 was bulky at the time, the first Sony portable DAT recorder with the battery on quite heavy also [I purchased this off Gary Parker a few months earlier]. To get the machine in I used to wear a pair of baggy trousers a bit like the ones Bowie dressed in on the 78 tour, so plenty of room around the bollock area. Gary had given me the leather hold case for the DAT so I used to put that on a belt and wear it around my waist under the trouser’s security don’t usually check there if they did they would have had a fist in their face.
So all set, almost first in the queue as Tanner and Matt wanted to get to the barriers front stage. Forgetting that I needed the batteries etc. Having collected the bits I headed to the bar first for a quick drink then to the toilets to set up the DAT.

The lead for the mic was put up through my shirt the mic would sit under my chin the DAT I would hold all the way through the show in my left hand.
As I made my way into the crowd to the standing area [This arena holds about 8,000 it has banks of seats on both sides and back of the arena the rest is standing] I made my way just in front of the mixing desk dead centre of stage and there I stayed all night.
The rest is on the tape, oh I will never forgive GP for not telling me that Bowie had changed where he did the ‘band intro’ hence the small cut on ‘Boys Keep Swinging’ I have never seen another alternate tape of this show.
I had also passed onto Matt a couple of props to throw on stage no not flower’s but a pair of ‘little white shoe’s’ during ‘We Prick You’ and also a little white toy [power ranger in fact] which I nicked off my 5 year old son, Matt kept his word and threw them on stage. To my amazement during ‘Teenage Wildlife’ Bowie picked up the Little white toy and sung to it !!!!
As a post script to this show I found out a few months later a friend of mine was one of the head security guys for the Arena and could have got me into the arena to see the sound check!!!!!
After the show I returned home I wanted to listen to the outcome of the tape and I was well impressed, also needed to copy to cassette for my mate Dave, but also for some of the collector’s I was dealing with at the time, they were sent copies as a matter of course no money changing hands I knew they would reciprocate at some time and they did.
Steveboy