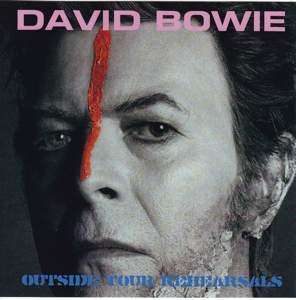 David Bowie of ’95 “Outside tour” 2 Disc that valuable rehearsal was recorded in high-quality sound board sound source appeared!

This rehearsal was held in November 95 London Elstree Studios album a new song from the “outside” of Scott Walker at the center “Night Flight” and to Ziggy era of cover to have been Jacques Brel “Maidesu the “etc. have also been picked up is a large recommendation live rehearsal that does not miss in Bowie collectors in an interesting place.

David Bowie Tour band 1995-1996 – Outside Tour
The Outside Tour was a tour by English rock musician David Bowie, opening on 14 September 1995 at Meadows Music Theatre – Hartford, Connecticut. Support during the US leg of the tour was provided by Nine Inch Nails, who segued their set with Bowie’s to form a continuous show.
Prick opened the first date of the tour. Morrissey was the support act for the European leg, but withdrew from the tour after nine dates.
On selected dates Reeves Gabrels performed songs from his album, The Sacred Squall of Now in addition to performing with Nine Inch Nails and David Bowie. The opening of the concert tour preceded the release of the 1. Outside album which was released on 25 September 1995. 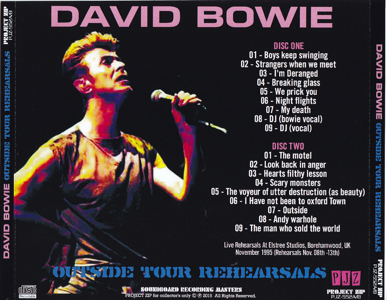