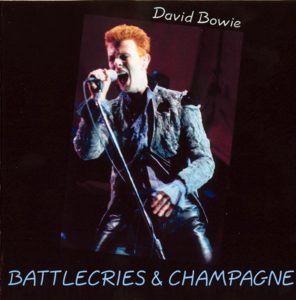 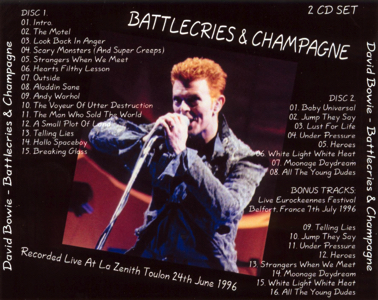 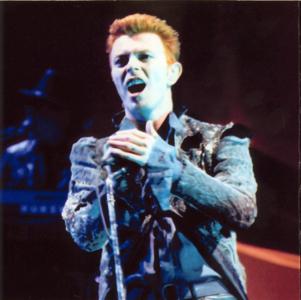 Several days before the show, Var-Matin the local newspaper talks almost daily about Bowie, even showing colour photos of his arrival on first page !
So it’s difficult not to know David is going to play in Toulon, even if I wait for this moment til February…

The Zenith in Toulon is a beautiful hall, with a modern apparence outside. Its sound qualities are well-known and excellent. So everything is bound to be alright tonight…!
Some 50 persons already wait outside the hall. Talking with some guys around, we learn that some fans come from the same town as us, from Grenoble, France. Among them, Stephanie, who’ll become one of my best friend.
I absolutely wanted to bring some photos from this concert, so I asked my mother (she’s a seamstress) to sew a false leather pocket that looks like the bottom of my rucksack. I hided my camera in it and it looked just as I wanted, as if the bag was absolutely empty …!!!
Everything is OK when security guy looks into the bag , even if he puts his hand really, really everywhere on it !!!

We entry the hall, and we run as always to the front of the stage… But we change our mind at the last minute, thinking the tiers are not so far after all. So we choose a spot just behind the mixind desk table just at the center from the stage and look the hall filling slowly.
Talking with other fans, I learn that the Loreley show, three days before has been showed on a German Tv in its entirety. Some fans try to negociate a copy of the Vhs tape then and there, sometimes demanding for it quite an exagerated price !!!
We then have a certain idea of what tonight’s set is going to be.
Just before the beginning of the concert, I realize that the setlist is sellotaped on the soundboard. I desperately try to have a look at it, and every second brings its surprise as I see that some incredible stuff will be played tonight.
We notice very soon the difference between this and the February’s Lyon show : the group has been drastically shortened and only Reeves Gabrels, Gail Ann Dorsey, Mike Garson and Zachary Alford stay on stage for this second part of the tour.
You can hear then the differences in the interpretation of the numbers, less sophisticated and much more agressive and crude.
Bowie has a red haircut that is much reminiscent of the Ziggy era I thought ! As well as the clothes he wears at the beginning of the show I dare say…!
The show begins with « The Motel », with Bowie singing out of view on his knees somewhere behind the right side of the stage. Then he suddenly stands as the quiet part of the songs still proceeds, coming slowly forward to the front of the stage still in the dark…
He stops briefly beside a wood table and a chair, the only part of the scenery of the stage with other several manikins at the right of the stage or hanged at the top of it…

Then this is an explosion of sound and lights for the conclusion of the song !
Bowie greets the Toulon crowd with a warm »Bonsoir, Merci beaucoup »…
Then follows »Look Back In Anger », with some blue lights : Bowie seems in high spirit, he often smiles and moves as if it was the first times of his career one may think !
« Scary Monsters » has some green lights filling the stage this time : that title is great on stage and full of energy with Reeves Gabrels playing the most excentric parts with his fabulous guitar (incredible surely he is).
« Strangers When We Meet » makes us breathe for a while : surely the most splendid song from the « Outside » album, with rays of green light fanning out in the hall…
Red lights fioll the hall this time for « The Hearts Filthy Lesson » with Bowie miming as if he was playing himself the solo of Mike Garson’s piano right at the middle of the song…
He often has problems with some of the lyrics which he can’t always remember as he would like so !
The first surprise of the night comes with « Aladdin Sane », which was for the last time played live during the « Diamond Dogs Tour » in 1974 !
I immediately think Mike Garson is much less inventive now than he was back then in his long solo of the song… I remember I then couldn’t hide my deception hoping he would do it quite the same way…
That song David sings together with Gail Ann Dorsey (Bass Guitar)…
The intro for « Andy Warhol » sounds really strange and quite odd from the original version, even with the February version too. Carlos Alomar has been left out so Reeves Gabrels must assume alone the guitar parts… He really does a good job though !

The next song is « A Small Plot Of Land »,the strangest song from « Outside » in my opinion…
David starts the song with a kind intro using a musical box, while some people from the audience clearly shout their approval.
Then Mikes Garson joins in with dramatic chords from his piano… Dark notes !
It sure is the most theatrical part of ’Outside’ too… The musicians, in particular Zachary Alford on drums and Reeves Gabrels do their very best during that song.
David goes on with an unknown and new song (at that time), « Telling Lies ». The very introduction of that song is as strange as was the interpretation of the latest song. A single white spot lights shines from his back while the stage is fit in red.
I thought it was great David used a new song to include in the set.
It was rare enough at that time to be mentioned…

« Hallo Spaceboy » brings back full and pure energy. I think the live version of that song is much better than the album’s : on stage, this is a real crowd mover… Great !
During that song is used a big globe that surrouns the stage holding four spotlights. That globe moves in an articulated way just above Bowie throwing rays of white lights. Some smoke gives the impression of a kind of UFO above the stage (with much imagination, of course !)!
Another surprise in the set is « Baby Universal » from the second Tin Machine album (1991). I didn’t think He could use some songs from that period.The fact that Reeves Gabrels is part of the band surely made David decide he could add add it for that second part of the tour…
I love that song, I think it’s a great song to be played on stage !

The next song is « Jump, They Say » (1993).
Much lights effects here too, projecting ovals of orange and blue on the curtain at the back of the stage. Then the ovals start to turn around as the song proceed…

The third big surprise of the night is the addition of « Lust For Life » from the Iggy Pop repertory. This song was written in 1977 in collaboration with Bowie, but that rendition is now much less powerful than the original one… Yet it’s a great song and everyone in the hall claps their hands…

With »Under Pressure » we have a duet between David and Gail : it seems like they want to give quite the same interpretation as on the Freddi Mercury Tribute concert in 1992… That was surely a great moment to remember when Annie Lennox sang this song in her strange outfits…
The last song before the encores is « Heroes »… Such a surprise too, since David told everyone in 1990 he ‘d never play again his most famous songs after the Sound and Vision Tour !
That song is still the crowd mover of the tours : the song finishes in complete hysteria with everyone claping their hands in the hall (as you can clearly see in the photograph behind)… Beautiful sight for sure with a Bowie visibly touched by the warmth of the crowd…

The first encore is « White Light White Heat », the famous Velvet Underground song…
Let’s go back thirty years back, guys !
« Moonage Daydream » confirms that Ziggy Era nostalgia… God, that song has never been played so greatly since 1973 !!!
Now it’s not one but two globes of lights moving above the stage, flashing at times as to salute the memory of Ziggy, the spaceboy (during the song David screams « Hallo Spaceboy ! » or « Oooh, the Spaceman ! »).

Great songs which can only be followed to conclude the show by one song : »All The Young Dudes » is played as the final extra !
The most beautiful colours illuminate the entire stage, giving a last magic effect to this fabulous night… A sea of arms fill the entire hall… Quite fabulous…
« Thank you so much, We will see you next year, God bless ya ! » (Merci beaucoup, nous nous reverrons l’année prochaine, Dieu vous bénisse ! »).
« Merci beaucoup, au revoir, bonne chance ! (« Thanks a lot, goodnight, goodluck ! ») says bowie in french to the 6.000 hysterical fans before leaving the stage.
The hall empties slowly, and together with some of my friends we walk behind the Zenith to try to see David before he leaves Toulon.
After waiting for quite a time, David’s big grey Mercedes comes forward. It seems like he will stop for signing us autographs, but NO !!! He waves to us and then the car disappears in the night to Antibes, Hotel Byblos where he’ll pass the night… .