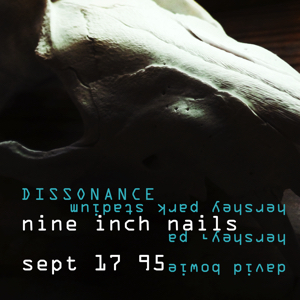 Notes:
Thanks to Travis Bickle sending this over for the archive. This was recorded with AT831b mics and not sure on the DAT recorder. ML confirmed it was a Sony DAT. This is a DAT clone of the DAT master and is definitely one of the better Outside Tour recordings. Other sources from this show either have some of the NIN set missing, Bowie set missing etc. This is the full performance. To my knowledge this may be the first time this circulates. I have not seen this anywhere previous. It seems that the DAT clone was cloned in LP mode and transferred optically. The Bowie portion was transferred analog and put to LP mode. In the words from ML. Either way, looking at the spectral analysis of both the Bowie and NIN transfers that were in 16/48. These were recorded in 16/32 (LP Mode) and have been adjusted accordingly.

Again, the recording is very good. There were a few pops and clicks throughout the Bowie portion that I had to remove. They were removed 100%. Most were at the end of the tape. There were some digital scratches during Reptile and Hallo Spaceboy that were omitted as well. I’d have to say that it cleaned up really well.