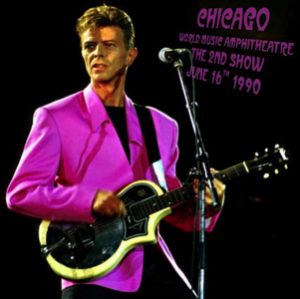 This was tour was supposed to be where David Bowie would be playing his old hits for the last time, saying farewell to those old songs in effect. Well, you know how gossip is…. That “farewell to old songs tour” somehow turned into a “Farewell Tour.” I just about jumped out of my skin when I heard “Bowie Farewell Tour” and bought tickets, any tickets, immediately, as I had never seen him live before. Maybe it was just a tactic to sell more tickets, but it worked because as soon as this “Farewell” stuff hit the radio, a second show was added here in Chicago.

The World Music Theatre (now known as the First Midwest Bank Amphitheatre) is a very nice outdoor venue, but if I have one complaint about this place, it’s that it’s just too big. The designers tried to cram too much into one space (there are two pavillions, the inner ring near the stage, the second pavilion outer ring, and then the lawn seats). The grade of the floor elevation is too shallow from the stage to the lawn, so that it’s difficult to see over the person in the row in front of you, and the rear of the main stage is open, so at least half of the sound from the stage act isn’t being directed towards the audience. I probably would have been better off in the parking lot making this recording, because I could have gotten alot closer to the band, although I really wouldn’t have been able to see them. The seats I had were so far away (second pavilion, section 202 – far right of the stage, row QQ – 38th row, seat 8, almost on the asile), I had to watch most of the show on the jumbo-tron anyway, because the band looked like tiny dolls on the stage. I can’t imagine what this would’ve sounded like from the lawn! Poplar Creek was much nicer, but it’s drawback was it wasn’t big enough for a “big act.”

Now I haven’t returned here since 1992, so they may have made some changes, but after seeing this show and the venue layout (this was the venue’s first season), I vowed never to return here unless I had seats somewhere in the first pavilion, preferably within the first 20-30 rows. Otherwise you’re just wasting your time and money.

This was recorded from my master tape of the show (except as noted below). The crowd noise was a little prevalent, and you can hear the largeness of the outdoor pavilion space on the recording. Re-aligned stereo channelization to reduce the noise floor as it was off. Normalized the overall output levels by scan throughout and increased or decreased them by approximately 0.5 to 2.0 dB as needed throughout for a fuller more dynamic range, and to re-balance the stereo image. Added a “fade-in” to “Ode to Joy” and a “fade-out” to “Let’s Dance” on Disc One; added a “fade-in” to “Sound & Vision,” and a “fade-out” to “The Jean Genie/Gloria Medley” on Disc Two for final presentation purposes.

No equalization was used. However, Dolby C was used on about half of the last track “The Jean Genie/Gloria Medley” (3 minutes) on Disc Two. This piece is also 1st generation, as my original first master tape ran out, and I had to use a patched transfer copy (which I used Dolby C on) I made from my first and second master tapes (the second tape was then re-purposed for something else because it only had about 5 minutes of material on it, so it no longer exists). The end is cut (maybe a minute of material) because I couldn’t fit it all on my transfer copy. I wasn’t as contientious about these things back then, as I am now.

All digital recording and processing was done with Goldwave (v5.25).

No artwork designed for or included with this particular document.