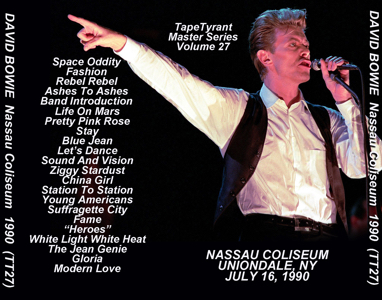 Welcome to Volume 27 of our master series featuring the master recordings of dime member “tapetyrant”. The series will predominately feature captures in the Northeast and Southern California areas. We will touch on multiple genres with a strong focus on Jazz Fusion, New Wave and Rock.

Tapetyrant was an active taper in the 1980’s and much of the 1990’s before, like many of us, hanging up the mics. What he captured during that time is uniformly excellent quality and his master tapes have been safely stored, the first batch are in pristine condition. Some shows may circulate from lower generation copies but most have remained uncirculated until now and have never circulated directly from the masters.

Prior to DAT, the heavy lifting was entirely done by a Sony D5 with NAK 300’s and taping was serious business, acquiring the best seats possible and working to keep neighbors in check.

Volume 27 features a second excellent recorder source for David Bowie’s stop at Nassau Coliseum on his “Sound And Vision” greatest hits tour. Recorded between the 10th and 15th row I believe this master is a solid upgrade to Recorder 1.

Thanks as always to goody for the pitch confirmation/adjustments and of course continued thanks to “tapetyrant” for doing such a great job capturing these important shows, for reaching out and entrusting me to present his excellent work for all to enjoy for decades to come.

We are indebted to his generosity (tapers don’t let those tapes and your hard work get lost to the ages, there are plenty of folks to get in touch with here to help get them out, we’re all working to leave no tape behind).