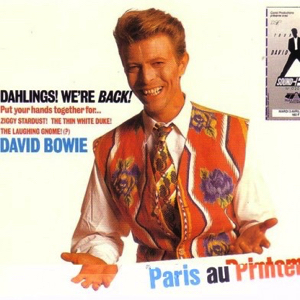 The second release of this Sound and Vision era bootleg, recorded in Paris, at the Palais Omnisports on the 3rd of April, 1990. It was supposed to be the last time Bowie ever played all the ‘old’ classics but since then he has thankfully gone back on his word. The original release with the same name came out in 1990 and originated via Japan and was frightfully costly, maybe because the bootleggers realised this would be the one of the last boots with the classic numbers on… or so they thought.

This 1991 re-release is numbered differently, and has lower budget disk art although the recorded content is the same; very good just with a slightly ‘echo’ feel to it. While the version of Heroes is one of the best I’ve heard because it’s passionate and powerful (unlike the modern live version), Ziggy Stardust is notably one of the worst live variations I’ve heard with far too much emphasis keyboards. Dahlings! We’re back!

There are a couple of better recording from this period which I would suggest perusing, although this is very good in fairness!