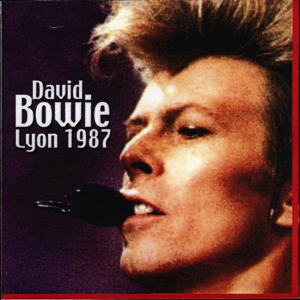 Description :
The first part was played by a french group from Lyon called Kent who was very well received, singing some funny songs .
Bowie waited for the night to come on stage, and the stadium wasn’t what we call a hysterical one… Very calm…Some had come just curious to see the Bowie show they had so much heard of on the French Tv and on the radio…Others had come with small kids on their shoukders, and I knew some people who were only there to see Frampton on stage !!!
There were evidently some old true fans too with their Ziggy T-shirts .
It was somewhat deceived at the time by the stadium atmosphere : no massive screams from the audience, just claps here and then…Years later.
For the encores , with ‘Time’ , people can remember that people were looking desperately Bowie on stage until the people finally found him when she saw everyone looking at the top of the Spider! !
A great moment for a great song, never to remember .
There exists at least 2 recordings from that night, as there was a guy just behind me who was recording the show too with his small tape recorder…. 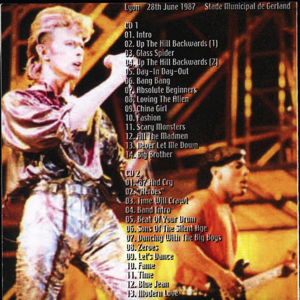 David Bowie Lyon Stade de Gerland 28/6/1987 ,The first Bowie concert I saw, back in 1987 on 28th June…
A great show for sure, and this review was shot on local network on 30th June.
Thanks >Chris Nathou

.
Review Christian R. 2007
I didn’t make a review of this show at that time, and my memory about it may fade now, but thanks to the official video recording of the Sydney show and some photos of the tour, I can make out parts of that night, some even coming back quite clearly…
At that time I heard about David Bowie about to come to France, and fortunately in Lyon, to give what they called a tremendous show, very theatrical… I ran immediately to buy a ticket !
Some of my school friends decided to go too. In fact we had all seen together Tina Turner one month before at the Palais Des Sports, always in Lyon, so we were ready for that show…
We didn’t know how to go from Grenoble to Lyon, which is about a hundred kilometers far. But my father said he would all take us by car. Poor dad, he waited for the show to finish outside the Gerland stadium, so more than 2 hours…!
We arrived in the Stade de Gerland at 5.00 pm. The weather was shiny, with a beautiful blue sky, and when we entered the stadium, we were astounded for the place was immense …
On the far side of the stadium was an immense « glass spider », it really was… It dominated the stage and the crowd… Really impressive !
For the moment there wasn’t quite a lot of people I thought, but this was all illusion, for the place was so big… We ran in small groups towards the stage…

I can remember having been very much more excited by the event than my friends, for whom Bowie was just another rock star, well a legend, yes, but just another one… I had to motivate them to hurry for I didn’t want to lose some precious places…
I immediately bought a concert program with great pictures of Bowie inside, but it wouldn’t be long before i realize it was a mistake : It was a heavy job to… Applause with it in my hands during the entire show ! So I put it under my shirt and in my trousers, but the perspiration finished to damage it.

CONCERT
The first part was played by Kent, a local group I didn’t know then… Their part, I can remember, was excellent, and the singer had a lot of energy and humour. They left the stage leaving the crowd in a total frenzy, but then a long wait begun…

Bowie, as written on the ticket was awaited for 7.30 pm, but we had to wait for a total night, almost 9.45 pm for the show to begin.
We had big wishes for tis tour. The theatrical feel of it was confirmed with that strange intro I recognized immediately, the end of « It’s No Game Part One » from the album « Scary Monsters ».
Carlos Alomar, who’s been playing guitar on Bowie shows since 1974, entered alone the stage, with leather clothes , a funny haircut and false sunglasses on his forehead, that reflected two more eyes !
Coming from nowhere, suddenly the Bowie voice shouted : « Shut Up ! »
While Carlos Alomar played his intro, some dancers came down from the top of the spider on ropes, then hit the stage itself to play dance steps…
Then the silence again, soon filled with the sound of the crowd shouting as loud as they could.
Then Bowie appeared, sitting on a silver chair, coming too from the top of the spider, and talking thru a rustic silver telephone which hide a microphone for the intro of « Glass Spider ». While touching the stage, one of the dancers removed the ropes from the chair.

A great introduction for the show for sure.But I soon didn’t feel so at ease for all these dancers on the stage were very intrusives I thought, ant their choregraphy wasn’t very easy to follow at times…!
The deception came out also from the sound, I mean the sound that came from the crowd.
In arenas the crowd can be heard en masse, which makes a lot for the feeling of a live concert. In a stadium, you don’t have this, and you only hear some applauses then and there, as if there was no success for the show. This is quite frustrating !

But it only was an impression for the 30.000 persons in the stadium were there to see Bowie, weren’t they ?

While the band played « Bang Bang »,as Bowie was singing at the front of the stage, a young girl managed to climb on the left part of the stage, as the crowd shouted as loud as they could. The dancers came immediately before her to take her to Bowie’s side, but first told her to put a dress on !
So shy first, she soon appeared to be very self-assured, and started to make dance steps with him… Sure she was part of the dancers , and we all laughed about that funny trick…
The songs that didn’t fit in the show, in my opinion, were « Absolute Beginners » and « Loving The Alien ». Put together, the energy of the beginning of the show was completely lost. Besides these versions were very long ones with a slower tempo than the originals : I wanted them to end as soon as possible for we could start to jump on our feet again ! These were my feelings at that time…
For »Fashion » Bowie made a special choreography, together with Tony Basil, with very impressives and theatrical dance parts, with a kind of street fight between him and the dancers. But at the end of it, he was for sure the winner, of course !

Quite a surprise at that time was the inclusion in te set of « All The Madmen », a cert for all Bowie fans. It was the first time he used it live for any tour … The song had been reworked and sounded much stranger than the original version, which is something… The central narrative part, especially, was kept from the original and it sounded like anything but « Let’s dance » or « China Girl » !
The second surprise was « Big Brother » which Bowie hadn’t played since 1974…
But this version was quite disappointing. Bowie’s voice couldn’t sing anymore the high notes of the original version. Furthermore, in the middle part of it while Bowie left the stage for a costume change, the band played a long drum solo, as to remind the 1976 tour with « Panic In Detroit ». But that solo was uninspired I thought, with even some strange pre-recorded voices as part of it, which sounded atrocious for me and still does while listening to the tapes…
This song allowed Bowie to go through the following one, which was « ’87 And Cry ». He stood on the top of a scaffolding, a rope rolled around his hands in a blue combination as a tracksuit. Down on the stage were several dancers dressed as policemen, with helmets on…
Bowie threw the rope to the dancers which tried to take him down to the stage while pulling at it. Then Bowie, maintained by cables and a harness was flying above the stage… Unbelievable !
At the end of the song they succeeded in having Bowie down on stage.Then they tied him properly leaving Bowie sit alone at the centre of the stage.
« Heroes » began then with a film projected behind Bowie on a big screen. It showed a man beside the Berlin Wall making his farewell at those on the other side…

While Melissa Hurley (the dancer with the dress, pseud fan from the crowd) tried to untie Bowie from the rope.
« Time will Crawl » allowed Bowie to leave behind for a moment the theatrical parts of the show. He only had this beautiful white guitar to play on…

Bowie then introduced the band, and continued with anti-commercials songs, as « Beat Of Your Drum », « Dancing With The Big Boys » and « Zeroes ». These songs were unknown for the major part of the crowd but the fans were really happy to hear them…
I can clearly remember I didn’t recognize at once the first chords of « Let’s Dance »… I know it’s a shame because my friend recognized it at once ! I thought this version was nonetheless a bit annoying, lacking some vigour…
During « Fame », I saw someone behind me with a recorder, trying to have a good recollection of this show. Seeing the kind of material, I felt the result wouldn’t be so good for sure ! I did what I’m still ashamed today : I came very close to him and started yelling loudly in case I could recognize me later, while listening to the tape !!!
Later, when I heard the tape of the show, I found the sound quality was average, to say… I really doubt whether this is the one which was recorded beside me, though I’m sure I can hear one of my scream not so far away, but at another moment of the show …!
The concert ended with « Fame », then came the extras… The yells from more were barely audible for the reasons I already mentionned…
The first encore was « Time », another great surprise. That song kept me searching Bowie for quite a long time, and I had to look over my head right to the top of the spider to see a flamboyant Bowie in a silver suit singing the song with metallic silver wings in his back !
The wings once completely opened threw rays of lights thru the stadium : a view I could never forget !
We all were in a trance by watching Bowie as an angel, and to hear him singing one of his most beautiful songs …
Then the wings closed again and Bowie disappeared from view, coming down thru the entrails of the spider… Just to appear once again a few moments later hanging by a rope tied on a harness. He then left the harness down to end the song…

« Blue Jean », « Modern Love » ended the show and everyone, the band and the dancers bowed to thank the crowd, as done for the end of a theatrical representation…
Christian R. 2007