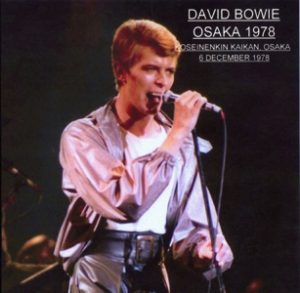 “we’ll be back in a few minutes time; thank you for coming” Bowie says after Beauty & the Beast. “On a new,Japanese drumset,Dennis Davs. He just got it today ,he’s very pleased with it” he tells before Five Years. A fine concert. Stay ends not in the usual way

Comments(Bootlegzone):
The easy bit is the venue – Kosei Nenkin Kaikan in Osaka on 6th December 1978.

Fletcher, Pimm Jal and Bassman all refer to an FM broadcast of this gig, which is only half of the gig, but has circulated very widely (most commonly under the names Isolar II and Reaction.

In 2010 Halloween Jack uploaded a restoration of one of his contemporary tapes. It was C120 that had been chewed, so Warszawa and half of Heroes are a mess, but the rest is quite exemplary sound. He used bits of Isolar II and Reaction to repair, and realised they were exactly the same source.

So the question remains, was there ever actually an FM broadcast of this gig, or was it just an exceptionally good audience recording?

HJ added two extras to the end. Normally I’d not be too impressed by this, especially when they don’t directly relate – but two Mick Ronson solo tracks from Old Grey Whistle Test in 1975? Yes please! SQ on these tracks is 8 or 8½/10.