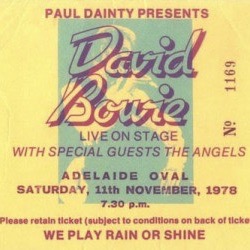 Well folks, that’s all there is. This is my own recording of Adelaide 1978, and the battery (unfortunately) died just after Station To Station began. I actually realised this while it was recording. I remember looking down at the tape going round, and noticed it had slowed markedly.

My thoughts raced… Maybe the concert would end soon, so my recording would be complete… no, I don’t want that, anything from this point on is just a bonus… maybe somebody else also recorded this concert, and we’ll get a complete version later… in little old Adelaide, I doubt that… Darn… I shouldn’t have recorded the Angels… “Well, at least from this point on, I can just concentrate on the concert, and forget the recording”.

So from this point on, in a way, I was just left… “Praying To The Light Machine”. ;D

As it turned out, the “Sense Of Adelaide” recording is complete, as well as being better quality, and hence would be my choice to listen to. The bootleg version, “Speed Of Life” is probably also a better quality recording, however it only has the second half of the concert.

This transfer was done several years ago, and the one thing I regret is the cleaning of the sound. As the original source, it did not really require cleaning, and really, the quality would not have suffered from the playback hiss (if any) from the original tape. I still have the original tape, so I will be able to do another transfer at some later date, but I don’t have a working tape deck at present, and I’m not sure a fresh transfer would retain the original quality anyway.

In any case, I’ve had several requests for this concert, and having rummaged through the drawers for the TSLC Logo, I have found it, so here it is.