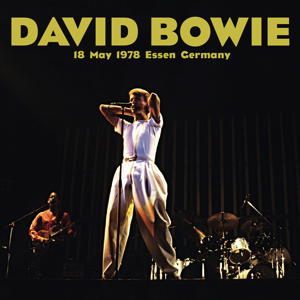 Label: No label
Audio Source: audience
Lineage: Tape
Total running time: 1:46:25
Sound Quality : very good. Equals record or radio apart from a slight noise and some dullness.
Attendance: 7.000
Artwork: by MossGarden.
Remaster : Remaster of the master recording received by Diedrich Streuper.
Note :One track, “Beauty And The Beast”, was taken from a different recording (tape by Ancorman, received by steve23yh).

“Wie geht’s Essen” Bowie Ask when arriving on stage:
All in all this show is very enjoyable and I would rate the quality of the recording as one of the best audience recordings of the whole tour.
Sometimes the audience noise is a little discommoding (especially a hand clapper close to the taper) but I tried to calm this down between tracks.

==================
note:
wav master files + flac file (Beauty And The Beast) -> Magix Music Cleaning Lab (remaster/re-edit) -> FLAC (44,1 kHz, 16 Bit, Stereo) -> bowiestation
Vg+/Ex- (vg- Beauty And The Beast) after some EQ was done (bass lowered, treble lifted).
Sound level adjusted. Speed adjusted for Beaty and the Beast (reduced by 2,5 %). Audience noise lowered between songs.
Distortions removed in track 11 (Fame): there were many of them but most very short so the music flow is still quite constant.
Only towards the end of the track the distortions were longer.
As almost the complete track 12 (Beauty and the Beast) was distorted I decided to patch it with the track from the other source (Ancorman).
unfortunately the sound of this is much inferior to the master source. But at the end I thought that it was better to have the complete show.
As this track is intended as the last one on CD1 it can be removed easily.