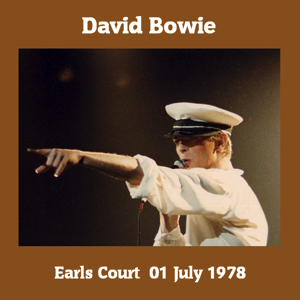 The usual order plus Sound and Vision after Speed of Life!.
After Station to Stahon: TVC15 / Encore: Stay / RebeL Rebel . “Sit down you motherfuckers!” an angry Briton yells at the beginning.
Be­ fore Sound and Vision Bowie says: “This is some thing we never have done before”: indeed it is the first and only time that this song is song live,so this is quite a unique occasion! Yet,I find it rather disappoin­ting,and someone is singing pretty off-key at the back. “As you probably heard this is the last night on tour. So ofcourse I’d like to thank very much the guys that worked with us. I’d like to thank Showco for the sound, … (?) … for the lights,and my trucking company,for the trucks, I’d also like to thank on piano Sean Mayes from Fumble. I mean,what are you guys doing after the show? Are you going to have plans & things? No? Oh good,then we miight tour again!”. This ofcourse is met with thunderous ap­ ?lause! The audience sing along with Five Years to a man. Du­ring Stay Bowie throws his sailor’s cap into the crowd and immediately he is showered with all sorts of hats and caps from the audience! Stay changes into Rebel Rebel and that is the end of the concert. “Thank you very much. We love you, goodnight”.

Matrix of 3 different audience recordings from the same show.

The problem here was that version 2 had a better sound than version 1 but was incomplete (Stay + Rebel Rebel missing).
My own version (same as version 2) was complete so I decided to take this version for part 2 of the concert (starting with the band intro). The sound quality of version 2+3 were not too different so it didn’t matter to take version 2 for part 1 of the Matrix.

So at the end the Matrix is almost spanning over the complete show and the result is a very unique sound.