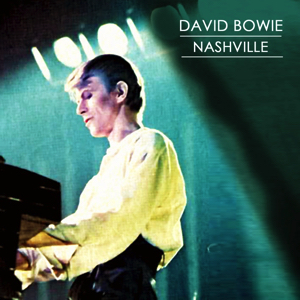 This is one of my favorite shows……..absolutely dynamite versions of everything and the ambience of the hall, the enthusiasm of the crowd is great.
If you are a fan of the ’78 tour at all you will love this. 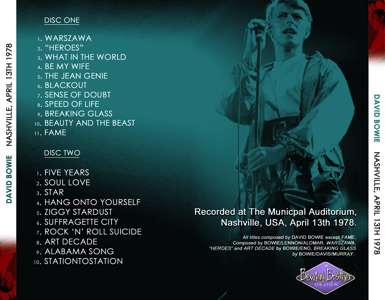 There’s a starman waiting in the sky — what a way to start a Monday.
While we all knew David Bowie was a mortal man, an earthling if you will, on paper, it just didn’t seem real until the sad news broke early this morning that the unrivaled rock icon born David Robert Jones has died following an 18-month battle with cancer. He was 69.

It still doesn’t seem possible. David Bowie? Dead? Can it be? Ziggy Stardust is the kind of rockstar that dies, not David Bowie.

Bowie — like metal god Lemmy Kilmister, who shuffled off this mortal coil just two weeks ago, on Dec. 28 — was something larger than the iconic, immortal music he leaves behind, something larger than rock ‘n’ roll, larger than fashion, larger than fame … larger than life and the many lives he lived! Whether as Major Tom, The Man Who Sold the World, Ziggy Stardust, Aladdin Sane, The Thin White Duke, Pierrot, The Man Who Fell to Earth, Mott the Hoople’s best songwriter, Lou Reed’s best backup singer, Mick Jagger’s best-dressed dancing partner or Jareth the Goblin King, Bowie was so good at being a rockstar (or rather, rockstar after rockstar after rockstar) that he made it high art, transcending the entire notion of what it even meant to be a rockstar.

And still, that accomplishment and all those shape-shifting personas pale in comparison to the millions-of-lives-changing catalog thats influence spans nearly five decades of incredible, forward-leaning music. From the jazzy cosmic folk-rock of Space Oddity, through the heyday of glam, pivoting to sleek blue-eyed soul, diving headfirst into Krautrock, cornering the market on art rock, weathering New Wave, wading into industrial rock and electronica, and eventually ending with hip-hop-informed post-rock on his 25th studio album Blackstar, released just last Friday (his 69th birthday), the impact of that catalog is simply inestimable. David Bowie fucking changed music, and cancer would claim his life before it could ever claim his creative spirit.

Bowie didn’t have much history with Music City, but he did perform here a half-dozen times in the ’70s. The last time was at Municipal Auditorium on April 13, 1978 — the 11th date on his Isolar II world tour. Luckily that concert was bootlegged and is currently available in full on YouTube. Capturing Bowie at the peak of his Berlin era, the set list heavily favors material from Low and Heroes, along with seven selections from The Rise and Fall of Ziggy Stardust and the Spiders From Mars, and, for good measure, his interpretation of the Bertolt Brecht/Kurt Weill classic “Alabama Song.” Enjoy it all up top.

It’s also worth noting that the Isolar II tour (aka The Stage Tour) was the first to feature lead guitar work from longtime Middle Tennessean Adrian Belew. Later, Nashville-residing guitarist Reeves Gabrels also played with Bowie, during the ’80s and ’90s, both in the singer’s backing band and during his four-year, two-album tenure with hard rock quartet Tin Machine.

“Well done, my friend,” Gabrels wrote in a Facebook post this morning. “The world has the music. What I remember most is the laughing.”

And in case you’re wondering how Bowie saw himself …