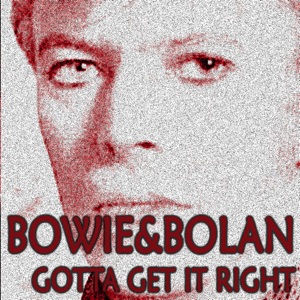 Standing Next To You was recorded on 7 September 1977 either at Bolan’s Manchester hotel room (The Post House?) or in a Granada TV Studios rehearsal room. Madman is from earlier in ’77 when Bowie was staying at Bolan’s Barnes, southwest London house, around the time of the Iggy Pop tour and just before Bolan’s ‘Dandy In The Underworld’ tour – so sometime around late February or early March.

The original recordings are on two separate reels and are in the collection of a private collector in Germany. A Bolan CD-R entitled ‘Collaborations’ containing these tracks was released about 20 years ago. The original reels were used for this disc. 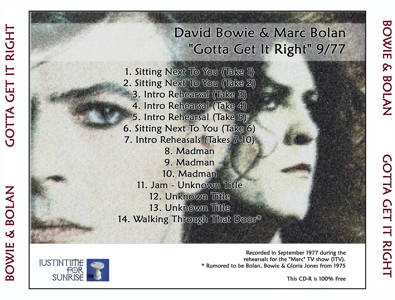 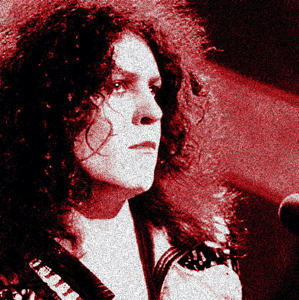 The only other musician on these recordings is Gloria Jones on keyboards and backing vocals.

Very little information is known about this tape, which was recorded in mid ’77 shortlty before Marc died. It features the rehearsals of “Standing Next To You” broadcast on the ‘Marc’ show. They also play “Madman” and two other songs (titles unknown).

‘Standing Next To You’ was recorded on 7th September 1977 either at Bolan’s hotel room in Manchester (The Post House?) or in a Granada TV Studios rehearsal room. ‘Madman’ dates from earlier in the year when Bowie was staying at Bolan’s house in Barnes, South-West London, around the time of the Iggy Pop tour and just before Bolan’s ‘Dandy In The Underworld’ tour – so sometime around late February or early March.

The original recordings are on two seperate reels and are in the collection of a private collector in Germany. A Bolan CD-R entitled ‘Collaborations’ containing these tracks was released about 10 years or so back. The original reels were used for this disc.

The only other musician on the ‘Madman’ recordings is Gloria Jones on keyboards and backing vocals.

Bowie and Marc Bolan first met in July 1964. He was still David Jones then, while Mark Feld had gone through one pseudonym already and would soon acquire another. They were both prospects of the promoter Leslie Conn, who put them to work painting an office (when Conn returned after lunch he found them gone and only half the walls painted). Born within nine months of each other, Bolan and Bowie became fast friends, rummaging through discard bins on Carnaby Street for clothes, grabbing crumbs from the great banquet that was London in the Sixties. They wanted to be pop stars, but their various singles and albums didn’t sell; they spent the decade off-stage, in the wings.

Then, as the hippie summer was fading, they began to strike. Bowie first, with his “Space Oddity” novelty hit, then Bolan, who ditched his Tyrannosaurus Rex mummery and his 20-word album titles and, using Bowie’s producer Tony Visconti, became the new decade’s first pop idol. Bolan’s success inspired and nettled Bowie, who aped Bolan’s singing voice on “Black Country Rock” and got Bolan to play lead guitar on his flop single “The Prettiest Star.” Bowie’s song for Bolan (“Lady Stardust”) was both a tribute to a fellow traveler and an attempt to press Bolan into legend, making him a predecessor to Bowie’s own creation, Ziggy, the last rock star. For a brief moment in 1972-73, they were on top together—Bowie breaking through with “Starman” while T. Rex was in the midst of its streak of top-charting singles. Paupers in the Sixties, they had suddenly come into their inheritances.

When glam died, though, Bolan was left stranded, a drunken host desperately trying to keep a waning party going. His attempt at futuristic glam R&B, Zinc Alloy and the Hidden Riders of Tomorrow—A Creamed Cage in August (not a good sign that the elephantine LP titles were back) was a dud, while some subsequent LPs didn’t even chart. He alienated Visconti, who stopped producing him; he lived on brandy and cocaine, got fat, seemed a spent force. All the while Bowie had moved on: breaking America, where Bolan had only been a minor presence, and recording his masterpieces.

So when Bolan and Bowie reunited in early 1977, the balance of power had shifted fully to Bowie’s side, to the point where Bowie could feel charitable. Staying at Bolan’s London flat during the Iggy Pop tour in March ’77, Bowie offered to co-write a song with Bolan, and the half-song (tentatively called “Madman”) that resulted had promise. With a raw, vicious opening riff that sounds like it’s inventing the Gang of Four, the best surviving version of “Madman” has Bolan’s shredding guitar fills and Bowie snarling lines like “when a man is a man, he’s destructive/when a man is a man he’s seductive.” Bolan would play the tape for friends: he was going to rework it, make it the center of his next record.

Bolan had cleaned up by the summer of 1977. Inspired by the new punk groups, who generally revered him, he was writing again, going out to shows. Landing a TV variety show with Granada, Bolan brought on The Jam, X-Ray Spex, the Boomtown Rats, Generation X. And for a finale, he would have Bowie, who had just completed “Heroes.”

The taping started off well, with Bowie catching up with Bolan’s backing band (who included his former drummer Tony Newman and Herbie Flowers, who played bass on some of Bowie’s early ’70s songs, as well as Lou Reed’s Transformer). Bowie and Bolan worked on a jam to close out the show. It wasn’t much (it didn’t even have a title, though bootleggers over the years have called it “Standing Next to You” or “Sleeping Next to You”) but they were having a good time. Then Bowie started running the band through “Heroes,” became consumed with getting the right feedback sound, and it soon was clear there was no place for Bolan, whose guitar would just clutter up the song. Bolan, irritated, went back to his dressing room, drank some wine. Bowie’s security men and assistants began taking over the show, preventing Bolan’s friends and staff from coming in the studio. Bowie, caught up in his new song, didn’t notice.

By the time they were to tape the jam sequence (which would run out the end credits), Bolan and Bowie were barely speaking. Mustering himself for the cameras, Bolan introduced the “new song,” and for a minute the two of them were equals again, scrubs playing a blues riff, making faces, calling each other out. Bolan went to strike a move and fell off stage, Bowie cracked up. The crew refused to do a retake, so the great reunion would end with a goof and a laugh.

The two made it up over dinner that night, set out plans. Bowie was going to tour, Bolan was going to make a record that would put him back in the center. A week later, Bolan and his girlfriend, Gloria Jones, went out for a night of drinking. At 5 in the morning, Jones crashed Bolan’s Mini GT into a sycamore tree on Barnes Common, striking the tree with enough force to crush Bolan into the back of the car. He was dead in a second, having not reached his 30th birthday.

Bowie went to Bolan’s funeral, set up a trust fund for Bolan’s son. The game had lost another player; Bowie had lost a friend, an influence, a rival, and one of the last who had known him when all he had was ambition.

“Madman” was recorded ca. 4-7 March 1977 at Bolan’s flat, where Bowie was staying during the Iggy Pop tour’s stop in London. The Cuddly Toys covered it in 1980. “Standing Next to You,” or whatever it’s called, was rehearsed and taped on 7 September 1977, a week before Bolan’s death. Neither’s been released officially. Paul Trynka’s Starman has the best synopsis of the muddle that was the Bowie/Bolan reunion.

There have been a number of other rumored Bowie and Bolan recordings from this period, though most seem spurious. The most credible-sounding, a track called “Walking Through That Door,” allegedly a supergroup recording of Bowie, Bolan, Gloria Jones and Tony Visconti from around the time of Bolan’s death, is most likely instead a demo of Jones’ brother, Richard, ca. 1975, with Bolan on guitar/vox.