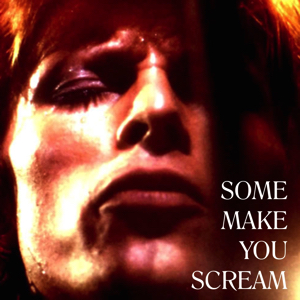 Same as Toronto,but half of Jean Genie ,and Rock & Roll Suicide are missing. The audience are very keen and when at the begin­ning of Sweet Thing they don’t see Bowie anymore,they get up. “Sit down,sit down!” a man cries and there is a great deal of yelling until the audience realise That Bowie is standing on the bridge. A lot of screaming during Drive in Saturday too; I bet something was happening in the audience,but I don’t know wh a t . When Space Oddity starts there are again a lot of people who get up because they wonder where Bowie is and it takes them some time to find out that he is sitting over the audience. “He sit down,are you deaf!” the same man cries. Many are
impressed,crying “Oh my god!”,others are disappointed not to see Ziggy and they jeer at Bowie. “How could they not like this?” one can hear a man say during Time. A fine concert,and a unique tape~

Toronto Star – 17 June 1974: Rock star
Bowie an appealing mystery
At one point during the first of his two O’Keefe Centre concerts last night, singer David Bowie danced to the edge of the stage where a girl was stretching her long arms in the air.

Her hands darted out, clutching at his pants, but Bowie danced away, remaining always beyond her reach.

It was as if no one would ever touch him, as if he wasn’t quite real.

Everything about Bowie’s appearance has this sense of unreality. The 6,400 tickets available for the two shows were sold out a month ago even though the top price was $6.80, there wasn’t a single word of advertising, and the 27-year-old Bowie himself is something of a mystery.

Yet it’s this mystery, with its hint of divine decadence, that makes him so appealing. Everywhere in the crowd outside the hall during the 30-minute delay before his first show began, you could see hints of his sexually ambiguous, futuristic style.

A couple of confusing gender strolled through the crowd, one dressed in a short, frilly pink slip, the other’s mouth smeared with frosted lip gloss. One girl, otherwise normally dressed, was wearing an enormous pair of bat’s wings. And elsewhere among the jeans and T-shirts you could see lilac lipstick, tangerine eyes, hair dyed Bowie’s rusty-red color, and the familiar Bowie lightning-bolt zigzag painted on people’s faces.

But even all this was nothing compared to Bowie’s show.

The set, taken more or less from the jacket design for his latest album, Diamond Dogs (RCA CPLI-0576) was filled with mis-shapen skyscrapers (plus one rather pornographic image) leaning eerily every which way.

One column on the left concealed a hoist that floated the singer through the air during a song about space. And high above the stage, a bridge with several lights emphasizing its bleakness completed the harrowing cityscape.

Despite the one hour and 40 minutes of solid satisfying rock, the show’s theme was the bombed-out future of George Orwell’s 1984. This, as Bowie’s voice intoned over some moaning electronic music, was where “fleas the size of rats sucked on rats the size of cats, and ten thousand peoploids split into small tribes, coveting the highest of the sterile skyscrapers.”

Bowie’s voice showed a remarkable flexibility and range of sounds coupled with his abilities as a dancer and a mime.

The show itself may have been a rock version of early Baroque opera, where the set often took precedence over the music, but Bowie knew exactly what to do.

In fact, he is undoubtedly the first rock star to actually use theatrics as part of a total presentation.

With his band on stage right, and two male singers-cum-dancers swirling around him, Bowie controlled everything, right in the moment when he was wheeled out inside a mirrored capsule that opened to show him off like some precious jewel.

At this point, with dozens of fans clustered at the front of the stage, their arms out-stretched, Bowie seemed like something from another planet. And this, of course, was exactly what he had planned.

Denoiser in iZotope RX2 to remove hiss
Running very slow. Speed adjustment with a factor of 105%.

Tape flip during Watch That Man – relatively clean join.
After the tape flip, up to Diamond Dogs, right channel unusable. Left channel copied with 0.002 second offset.
40 seconds (from 3:10) Drive In Saturday are completely unusable (including sound of someone rewinding the tape). Removed with fades.
Gap one minute into Diamond Dogs. Removed with fades.
Another 35 seconds of muffled backwards music at 4:09 in Panic In Detroit – simply removed, reasonably clean, but with change in timbre.
Gap right at the start of The Jean Genie. Let’s Dance repair attempted from next line, but the difference is audible.
There’s only 1:44 of The Jean Genie on the tape.
Sector Boundary Errors fixed with TLH.