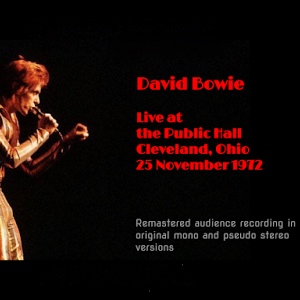 I was really pleased to find this one – from the later, second leg of the the 1974 tour, an alternative gig to the gigs in Philadelphia which formed the official release David Live! with some different band members. Its a full soundboard recording – and of course, a complete live record of one gig, not a composite.

Live and Loud! began as a fortnightly internet radio show taking old unreleased live concert recordings I could find and working to repair and improve them – fixing tape hiss, noise, tape drop out, clicks, speed variations, defects – before improving the sound quality by EQing the sound to bring out the instruments as clearly as possible. These are now made directly available to download for free to reach as many fans of the music as possible.

Depending on the quality of the original recording, these can often be made to sound almost like commercial recordings – but of course I can’t guarantee that for every show. What I can guarantee is it will sound far better than the original files available which have been floating around the internet and on bootleg recordings for many years.

Almost all are either “soundboard” recordings taken directly from the mixing desk used at the gig on the night – or old FM radio recordings. A few gigs, if they are of special historical importance, make an appearance even if they were recorded from the audience.
Do your ears a favour and listen on headphones or good speakers to get most benefit – laptop speakers will always sound pretty poor by comparison.

All shows still available are listed, including a link to download the remastered show for free.

These are great fun to listen to but DO NOT replace original releases – support these artists and buy their music.

Additional info:
The whole recording was remastered by Flip Martian in MP3 320. His source is unknown, but probably one of the many CD bootlegs from this concert.
The whole recording was in one large track with Flip Martians intro and outro.
In the main version the intros and outros are removed and fades are used at the start and end of the concert.
In the extras folder there are 4 files that should replace 2 of the files in the main folder to include the intro and outro.
Track split, fixed SBEs, named and tagged by Jan Erik
To burn CDS, Knock on Wood should be first track on CD2.

Bowie greets the crowd after ‘Aladdin Sane’ for the first time in a mock accent and ushers in ”All the Young Dudes“, a song composed by Bowie, but made famous by ‘Mott the Hoople’. A melodic call to arms for all of Bowie’s ‘people’, freaks and geeks alike.