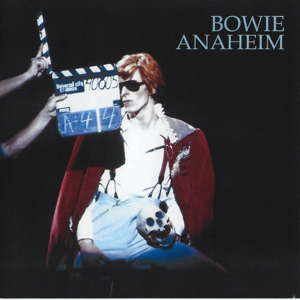 Mike and I (JEMS) along with a friend of Mike’s attended the David Bowie concert on Sept 16, 1974 at the Anaheim Convention Center. We sat on the Floor, 15th row center. Roughly 10 rows behind our sweet spot. This was the first Bowie concert for any of us.

The show was in the “Pre Wheelchair Era. Security was extremely relaxed at the Convention Center, in fact it was more at an “amateur hour” level. I smuggled in fresh batteries in a fake lens case at the bottom of my camera bag. If Mike was stopped by security, he would simply offer up his batteries, knowing all the while I had a fresh set if needed. We would enter into the building using separate doors to avoid the appearance we knew each other.

This was also the “Pre Nak Era. Mike used a Sony TC-152SD and Shure mics I smuggled in my camera bag and Mike’s friend smuggled in an 8mm movie camera. The three of us met up several days later at Mike’s house syncing up the film with Mike’s recording. It would be in perfect sync for several seconds, then drift apart. A little frustrating, but it was loads of fun. Where is that footage now?

Mike had not utilized the hat yet for holding his mics. He taped the Shure mics to the chair arms. We then covered them up with a jacket with the mic heads sticking out. Speaking of amateur hour, if you listen closely, you can hear us talking, Mike included, between songs. Sometimes our voices sound more distant, confirming the microphone location on the chair arms further from our mouths than if the mics were in Millardís hat.

The Anaheim Convention Center is small for an arena. Capacity is around 7500. Despite the smaller size and our 15th row seats, the sound quality was not very good. Perhaps they skimped out on the PA system. Being in the 15th row caused my pictures to be on the grainy side. But what can you do, we were happy to be there.

Despite the sound system, the show was great. David’s voice was in fantastic shape and showed tremendous range. 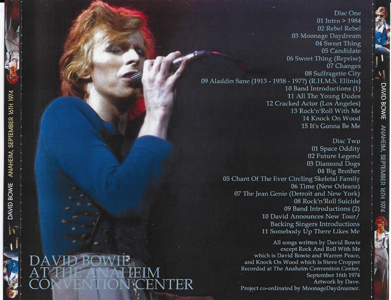