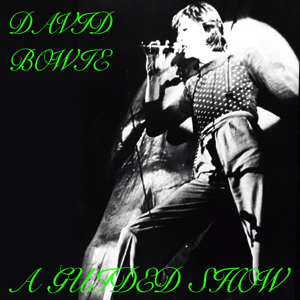 Label: Old Gold Records 1999 – OGCD110
Audio Source: audience
Lineage:
Total running time: 1:20:31
Sound Quality : Not good ,much Noise ,very dull
Attendance: 4.000
Artwork: Yes.
Note : This show comes from the Old Gold CDR “A Guided Show” (OGCD 110) for the major part, and “You’re Knocking Me Dead” (OGCD 111) for the last three tracks. Peculiarly, the fellow who recorded this concert gave a running commentary on the visual occurrences during the show, which now serves as an insight into the show which to this date is not, in it’s entirety, available on video.

This tape has long been unattainable for me as well as for many of my fellow-collectors until,in 1984,it suddenly surfa­ced. The tape was made by David Fletcher,author of ‘Discogra­phy of a Generalist’.
The first five minutes are taken up by a text pronounced by Fletcher in which he describes the incre­ dible decor of the Diamond Dogs show; this is a kind of intro­duction of the listeners to the concert they are about to hear. Fletcher saw the show together with a friend of his,Tom Ward. After Fletcher has finished and the actual recording of the concert starts,one can constantly hear their voices. They speak into the microphone in the course of the concert to explain what is happening on stage.
This sometimes smothers the music,but on the other hand I do appreciate to get an impression of what is going on. One can also hear their cries of enthusiasm,e.g. at the beginning of 1984,which,by the way, they identify as Big Brother,shouting it into the recorder with fervor. During the guitar solo in Moonage Daydream one of them calls out “God,this is super!” and the other “Unbelieva­ble!”. “There’s one guitar player on stage with a green single light on him only. Now there’s one on the drummer. It’s … (un­ intelligible) … with about ten purple stars and a big rock formation of buildings in the background”. During Sweet Thing:
“Now David Bowie is singing Sweet Thing up on a scaffolding,it looks like a bridge with street lights over him. It’s up about three or four stories,and the Spiders from Mars are down below screwing around – very cool!” (obviously they were not yet aware that Bowie’s accompanying band was no longer the Spiders). “Good evening Cleveland” Bowie says before All the Young Dudes,which are the only few words Bowie speaks during this concert.

Now and then the tape creaks a little,and there are short interruptions – there are also little bits missing from 1984, Aladdin Sane ,When You Rock & Roll With Me ,Drive in Saturday,Panic in Detroit,Time and Width of a Circle.

The Future Legend tape before Diamond Dogs is omitted this time,which I reckon had not been planned: probably the equipment was out of order or something,for the usual “Bro-bro-bro-bro-bro-bro-bro”,which obviously is part of the same tape,isn’t heard. On the whole there was quite some trouble with parts of the d~cor and other things during the Diamond Dogs tour. “The Dogs just tied David Bowie up on stage!” Fletcher or his friend call out during Diamond Dogs.
This version of Panic ‘z:n Detroit is rather strange: for one thing,the tape with the panicky screaming is not played (another indicaLion that something was wrong with the sound equipment.or maybe the tape containing this,Bro­ther, and Future Legend had been mis laid) ,for another, the guitar intro is replaced by piano!
It lacks all fluency and sounds rather awkward,so I suppose it hadn’t been rehearsed but was improvised there and then. Did Earl Slick break a ‘ string or what else can have kept him from playing in this
number?.
Rock & Roll Suicide is only 29 sec from my copy