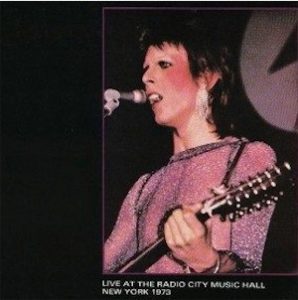 This version has a cut in Panic In Detroit, very small, which was a tape divide/tape flip. It also is missing the Ode To Joy and starts right with Hang Onto Yourself.
The quality of Drive In Saturday and Let’s Spend the Night Together is a bit different than other songs on the cassette, wondering if they were patched from a different source.
Please give me some feedback on this one and enjoy the listen!!

Another great concert, and quality-wise this is the best tape of 1973.
After the beatifully sung My Death,the film of the cosmos rushing at high speed towards the audience was again produced,accompanied by all kinds of space sounds. The audien­ce’s response to this is quite funny: lots of “Oh my god”s and some one says “Oh god,I have never seen anything like it!”. The film charges into Supermen ,this time in a special perfor­ mance: Bowie sings the first lyrics and then the band join in. Very good!
Bowie announces the new songs of Aladdin Sane. “That was called Aladdin Sane. This is called Panic in Detroit,which was written in Detroit” Bowie says,and immediately afterwards a man from the audience can be heard to shout “When’s your album corning out?”. But there is no reply from Bowie!