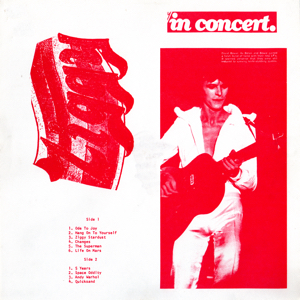 Here we have THE VERY FIRST Bowie Bootleg ever produced. Released by Berkeley Records in the USA, probably early 1973.
It’s the first part of the Santa Monica gig 20th October 1972. It includes a partial DJ intro with the complete “Ode To Joy” intro.
This is a direct copy of the LP, pops, crackles, warts and all, including the rather abrupt ending after “My Death”.
The sound quality doesn’t compare with the later TMOQ Santa Monica releases but it’s historical importance is unquestionable.

The printed label is a mirror image of a Janis Joplin/ Full Tilt Boogie Band Bootleg called “Wicked Woman” on Memory Records (JJ-713). Apparently they had some of these labels left over so just used them in reverse to get rid of them, as bootleggers do 😁

==========
This is the famous concert that was recorded by RCA for a posable live LP and was broadcast.live on American radio.During the moments leading up co the show the DJ is heard;”Steve Martin here,backsrage at the Santa Monica Civic Auditorium.It’s a cool night in Los Angeles and,as you may know or not knou,The Santa Monica Civic is about a hundred yards from the beach so we have a cool breeze blowing off the ocean through the stage door at our backs.The auditorium is packed,as a matter of fact,the first David Bowie concert in the Los Angeles area. There will be one more tomorrow night,this is the concert tonight which will be recorded by RCA for the next David Bowie album and we expect do hear some new material by this British superstar. David and his group,The Spiders from Mars,will enter from the other side of the stage.The auditorium completely blacked out except for flashing strobe lights. 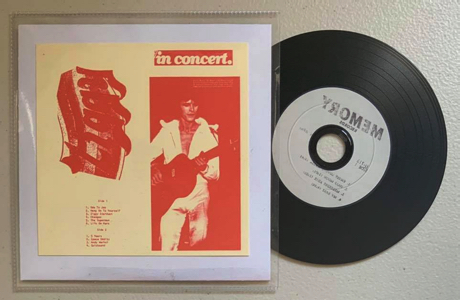 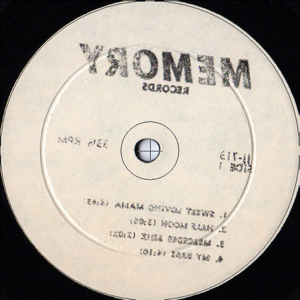 Now the entrance music will be do the ode,or I should say to the Ode to Joy which is featured in the movie ‘Clockwork Orange’ and the house lights are starting to dim,here’s David.David Bowie live on American radio for she very first time so it was of the highest importance that this should be a good concert No doubt Bowie and his men were frightfully nervous,but the first part show came off flawless – up to Five Years,when Moke Ronson honson s backup singing was not a little out of tune!After the number Bowie is snowed under with cries from the audience while he is trying to fix a microphone to his acoustic guitar which evidently poses a problem: OK. Boy you’re terrific! Give me pair of pliers,pliers or strong hand. Hmmhmm that’s aenough,don’t tighten it up again. No leave it,look.come here,leave it no just leave it”.Then,with Ronson playing bass guitar,Bowie sets in an acoustic set. of three songs, Space Oditty being the first.The nummer commences,Ronson counts,and as lift-off murmurs “Aaaaaaaaaaaaaa”in a rising tone,ending with n funny “Diddawoo ida”.The Give rendering of the number which is of an exceptional beauty,really splendid! Thank you That was called Space Oditty.
This is a painter.from New York,terrific! That’s my impersonation.and it’s about a man called Andy Warhol – Warhol”. This too is beautifully p1ayed,and the singing is serene and refined.”Playing to you courtesy of a piece of palm tree that I ate,I asked for lobster tail,and they brought me palm tree,piece of palm tree. Yeah,really. Thats all” Bowie says,then goes on with the lovely song My Death,with nothing but his own guitar to accompany him.
Bowie announces Jean Genie: “This one is about -give me some lead – no it isnt,it’s about a New York lady it’s about a guy who lives in New York called Jean Genie,and it begins in E”. when after Suffragette City Bowie and the Spiders Leave the stage,DJ Steve Martin is heard again: “You hear the applause and that’s a bid for David Bowie to come back on,and they are coming back on. He’ve at Santa Monica Civic,first of two performances in town. They’re back on stage, they’ll perform some more,a standing ovation”. Rock & Roll Suicide is the last number they play. when they go they leave behind an enthusiastic audience of converts. The entire population of the US had been enabled to listen to this wonderful
concert,which did much to advance Bowie’s popularity