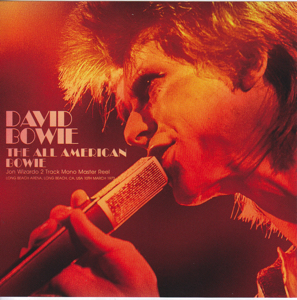 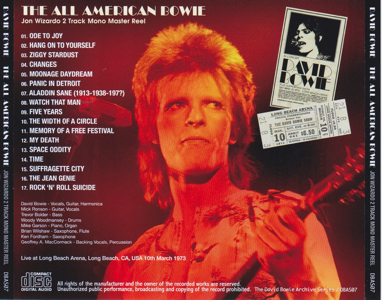 The second Bowie title “THE ALL AMERICAN BOWIE”released by the legendary TMOQ label is different from the first 1972 Santa Monica radio broadcast, and this time the audience recording was independently carried out at the Long Beach Arena in 1973. In fact, at the same venue, TMOQ’s Dub Taylor made excellent audience recordings many times. Therefore, it was thought that this was also done by him, and Dub recordings, including Rolling Stones’ “LIVE’R THAN YOU’LL EVER BE”,were distributed among traders by him. In many cases, items with more songs and improved sound quality than LPs at that time are now being released.
However, regarding “THE ALL AMERICAN BOWIE”, the original sound source was not distributed, and in 1973 during the Ziggy period it could only be heard on LP. In addition, five years after the release of that title, three songs that were not recorded on the compilation board “MY RADIO SWEETHEART” saw the light of day in an irregular release form. Focusing on that, the CD version “THE ALL” released by the Wardour label was a masterpiece based on files carefully compiled from two LPs (hereinafter referred to as “existing board”;).
Therefore, regarding the 1973 Long Beach and various LP items, there was a feeling that they had already been mastered by the already-launched board, and I could not imagine that anything more than that would happen. The research book “A PIG’S TALE” on the TMOQ label published last year suddenly threw a stone into that long-standing situation. So it was revealed that “THE ALL AMERICAN BOWIE” was not a Dub Taylor recording but was recorded by Jonn Wizardo, who later launched the Wizardo label. In other words, it was a sound source recorded for Dub by Wizardo, who respected TMOQ and was already acquainted with them.
In that case, the original sound source of “THE ALL” might still exist… At least the previous book contained a photo of the master Dub edited for the album. On the other hand, the release of master tapes recorded by Wizardo has continued for the past few years, and even the master of “BOWIE 74” witch he later released on Wizardo, has appeared. If that happens, naturally, expectations will be placed on the excavation of “THE ALL”. The day has finally come when the dream of Bowie-mania around the world will finally become a reality.

The master of “THE ALL”, which was thought to have been lost at one point, was circulating under the surface among Bowie’s core collectors this year. From there, the sound source appeared for the first time in the summer with a super limited LP. The super limited release titled “FULL AMERICAN BOWIE” as sold out in no time, but the original master file also started to circulate. Of course, this time, I received a direct sound source from a British Bowie researcher without going through the net.
The more I listened to the Long Beach master whose whole picture became clear, the more I unfortunately suffered from the disconnection of the microphone that I recorded at several places, and I had to release it on one LP. I can understand the situation. Because of that, “Space Oddity” as been recorded from the middle. Furthermore, there were frequent disconnections at the encores “The Jean Genie” and “Rock ‘n’ Roll Suicide”. It’s heartbreaking to hear that such encore problem was corrected as much as possible and provided.
Thanks to the master who saw the light of day in this way, it turned out that the song order of the already released board was wrong, but more than that, the sound quality improvement unique to the master is amazing. “THE ALL AMERICAN BOWIE” and “MY RADIO SWEETHEART” were of poor record quality due to the 70’s pressing, and that alone was a level where the difference from the master this time appeared, but was this the original sound – mesmerizing. For example, if you listen to “Suffragette City” in the second half of the show, the difference is obvious.

And after all, the American tour in 1973, which was the start of the “Ziggy Big Band” period and “ALADDIN SANE” mode, which added support musicians such as horns and percussion in addition to members of The Spiders From Mars. During this period, although the audience recordings such as Radio City Music Hall in February and Detroit in March were clear, there was a distance to the sound image, where Long Beach was overwhelming with the closeness and power of the sound image. That’s why the excavation of the master this time is epoch-making, and its upper feeling is also remarkable. In particular, the repertoire from “ALADDIN SANE” including “Watch That Man” is captured with plenty of power.
And the performance is also wonderful. From around this time, the intro of “Moonage Daydream” began to be teased, and on this day the pattern like the farewell show was completed. Still, unlike the time of Farewell, it is unique to this time that Bowie will raise his voice and sing. But after all, what surprised me by this excavation was the scene where Bowie sang “Memory Of A Free Festival” a little before starting “My Death”. Obviously in a good mood, he played the second part of the song for a little bit, and everyone was surprised by this.

In this way, the master of Long Beach “THE ALL AMERICAN BOWIE”, which had a reputation as an audience recording with good sound quality for the 73-year American tour, was finally discovered. In addition to the surprising scene like the one above, it is also a historical excavation that the exact set list was revealed for the first time this time. This is definitely a must-listen for all Bowie enthusiasts!