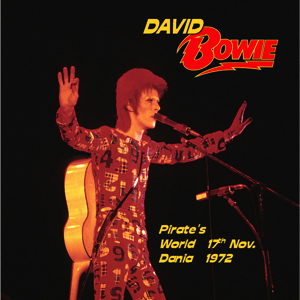 A historic gig amongst the Bowie community, the Pirate’s Cove show from 1972 showcases the first ever performance of a newly written Drive In Saturday, which is performed solo by Bowie on acoustic. This is one of the better quality existing Ziggy era tapes, and although the tape itself is a bit overmodulated, the sound is full. There are very few tapes that exist from the first American leg of the Ziggy tour, so for those interested in the history this is worth the download. I received this recording as part of a batch in the mid 80’s so perhaps it is lower generation, there is not a lot of tape hiss.

Combination of 2 audience tape versions from the same source.

Other remarks:
– There is still some hiss present but I decided to leave it that way in order not to remove too much of high frequencies.
– Some seconds in the middle of Width Of A Circle missing due to tape flip
– From all versions I know of this concert part 2 (starting with the 2nd part of Width Of A Circle) has an
inferior sound, manifested by a lack of higher frequencies. I decided to take part 2 from my tape as the sound was a bit
superior to version 1. Nevertheless version 1 had a better sound at part 1.
– There are only ca. 2 seconds missing of the start of the second part of WOAC as in version 2 there is a slower fade in.
– The second half of Space Oddity is getting inferior in sound and was EQ’ed separately (treble lifted)

In comparison to all other versions I know of this show this version has a much wider range of frequencies especially at higher frequencies as I have avoided to run an automatic hiss reduction process step.
I know that some people would still prefer more hiss reduction but for me this version here represents a very good compromise between enjoyable frequency range and partly reduced hiss.