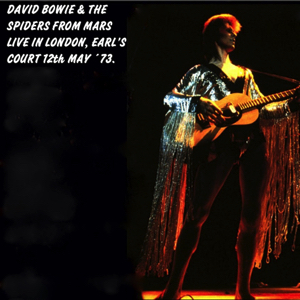 An audience tape of the infamous opening show of the UK Aladdin Sane tour, this was the first time Earls Court was used for a concert gig and a large proportion of the 18,000 audience had a very bad view and poor sound, hence a riot ensued, fistycuffs and general mayhem. Not bad for an opening night!!
At one point Bowie left the stage and the audience were passified by a roadie, the audience finally calmed down when Bowie refused to carry on unless they behaved.

This is a typical audience recording with the usual pops and squeaks etc although the quality is much better than average (8-8+), I have removed a tiny bit of hiss from the top end but thats about it. The tape does have a drop in quality from “Panic” onwards (6) and I had to do a bit of work, mainly by amplifing this section to keep the level as consistent as possible. Whether this is only on my recording or the master i do not know (Perhaps the guy was being trampled by this point!).