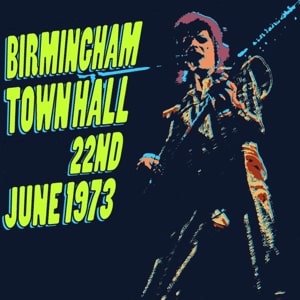 Bowie was one of the many legendary musicians to have performed at Birmingham’s iconic Town Hall which has also hosted the likes of Led Zeppelin, Buddy Holly, Roy Orbison (supported by The Beatles) and Black Sabbath.

This tape seems to be very rare as it never appeared on any torrent tracker (it is also on dime now). The recording itself is almost complete as
only a small sequence of Width Of A Circle is missing at exactly 56:00 min.
What in my opinion makes this recording great is the atmosphere of the set, especially during more quiet passages. You can almost materialize how the fans are reaching out
their arms to touch David. Amongst others there are great versions of Time, Jean Genie/Love Me Do and especially Let’s Spend The Night Together with a big portion
of Mike Garson’s piano (who “is not really a Spider” according to David’s band introduction). The version of Width Of A Circle is one of the longest from that tour even as a small part is missing.
The sound is improving from Hang On… to Ziggy Stardust and later within Queen Bitch and again at the 2nd half of Width…
After 2 min. of Waiting For The Man I changed to only the left channel as the right channel became inferior in sound. This is maintained until the end of the recording.