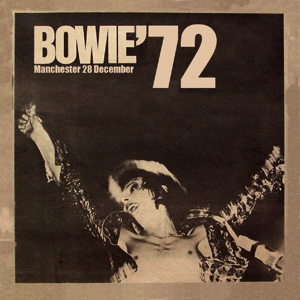 Here is a concert review of the show by New Musical Express:

“It’s THE big return and Bowie’s out there suggesting ‘Let’s Spend The Night Together’, though his offer is more innocent than the sinister sexuality of Mick Jagger’s version. There’s our lad in glitter jacket and tight, tight, red knee-length pants,yelling out something about schoolkids and urging “I believe in education – educate me!” before thrusting into ‘Spiders From Mars’, ‘Superman’ and ‘Changes’, all effort and little subtlety, with Mick Ronson playing guitar much as a Dowager Duchess might play with her beads, good twiddles here, mucho padding there.
But Bowie’s pleased to be back, anxious to be adored, and he delivers the rest of the set with a zest that actually drains onlookers and it’s the crowd who finally stagger out into the street feeling knackered but ready to face ’73.”

Source 1 was running slower than source 2 (very inconsistent) and I adjusted
the speed to source 2 as this was already adjusted by steve23yh. The sound level of source 1 was corrected and as the audience noise was very present it was lowered a lot in level.
At the end some EQ was made to achieve a balanced sound.
The result of the matrix is really worth all the work as we have now a very good sounding recording which is on a level with
some “middle class recordings” like Kingston Polytechnic with some deductions like the middle part of Width Of A Circle.
But all in all the show is now very enjoyable and even if it was quite short Bowie, the band and the audience are in good shape.