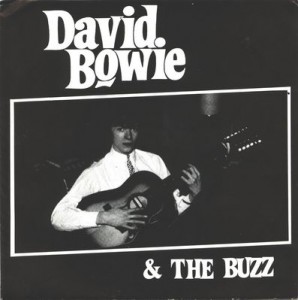 For much of 1966, David Bowie was backed by a group called the Buzz, although they only recorded one single with him (on which they were not credited). Bowie formed the Buzz quickly in February 1966; his previous band, the Lower Third, had left after a dispute with management over pay. The band was assembled via an ad placed in Melody Maker by Bowie’s manager of the time, Ralph Horton, and played their first show in February 10. The name the Buzz was suggested by a Radio London DJ.

the Buzz backed Bowie on his fourth single, “Do Anything You Say”/”Good Morning Girl.” “Do Anything You Say” was one of Bowie’s least-distinctive ’60s efforts, and “Good Morning Girl” wasn’t all that great either, though it at least had a soul-jazz organ groove and a scat vocal break going for it. On Bowie’s next single, the Buzz were replaced by session musicians, although they were still working with him live. For a while in 1966, they played regularly with Bowie on Sunday afternoon shows at The Marquee, the London club that had done much to build the audience for the Rolling Stones, the Who, the Yardbirds, and many others.

Later that year, the Buzz played on Bowie’s debut Deram single, “The London Boys”/”Rubber Band,” as well as another song at the session, “Please Mr. Gravedigger,” that would appear on his first album. A bootleg single of two unreleased Bowie tracks, “That’s a Promise” and “Silly Boy Blue,” purport to be 1966 performances with the Buzz. “That’s a Promise” has more of a mod rock sound than either of the two singles on which the Buzz play, and “Silly Boy Blue” is an interesting, superior version of a song that Bowie would re-record for his debut LP. These tracks also appear on the quasi-official collection The Forgotten Songs of David Robert Jones. They’re probably a more accurate representation of how Bowie and the Buzz sounded live than the officially released studio recordings are.

In December 1966, Bowie left the Buzz to become a solo act. the Buzz offered to stick with him for a while for no wages when Bowie told them he couldn’t afford them, at which point it came out that the real reason was that he wanted to be on his own. They did, however, back Bowie on early 1967 studio sessions for his first album, on which Buzz bassist Derek “Dek” Fearnley helped with arrangements.. Only one member of the Buzz, lead guitarist John “Hutch” Hutchinson, played an important role in Bowie’s solo career. Hutch played in Feathers, the folky trio Bowie briefly led in late 1968, and then as part of a folky duo with Bowie in 1969, making some recordings with Bowie in the late ’60s that have shown up on official and unofficial releases. He also toured as part of Bowie’s Spiders From Mars band in 1973.

the Buzz who backed David Bowie, incidentally, are a totally different band than the Scottish group called the Buzz that issued a highly regarded mod rock single, “You’re Holding Me Down,” in 1966.