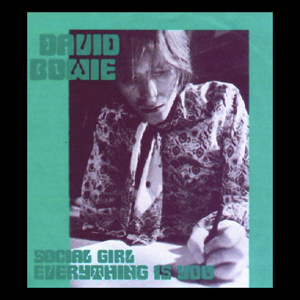 David Bowie Everything is You – Social Girl (1967)

These two lesser Bowie compositions were demoed around the same time as “Silver Treetop School For Boys.” “Everything Is You” was eventually recorded (again by the Beatstalkers) while the wan “Social Girl” would forever lack an interpreter.

The lumberjack love ode “Everything Is You” is wonderful in its odd way, with a dorky opening guitar riff that’s mirrored by the wordless chorus, a galumphing shanty rhythm (the demo sounds like it’s been cut one afternoon in a pub) and a lyric that reads as if it had been directly translated from Finnish: “A little piece of leather ’round my head/to stop the sweat from dimming up my eyes/I feel your grace in all the trees/your strength is in the axe I wield.”

“Social Girl” isn’t as sweet. It’s a nasty little barb, a bit of neighborhood gossip and slander disguised as a sub-Beach Boys song. The demo’s lousy-sounding and is sung and played with utter indifference—you get the sense Bowie knew this one wasn’t going anywhere.

Both were recorded ca. April-May 1967 and believed lost until the acetates surfaced a few years ago; the recordings now occasionally pop up on the Internet. The Beatstalkers’ version of “Everything Is You” (which is a holy mess) was cut as the B-side to 1968’s “Rain Coloured Roses.”

info > Pushing Ahead of the Dame