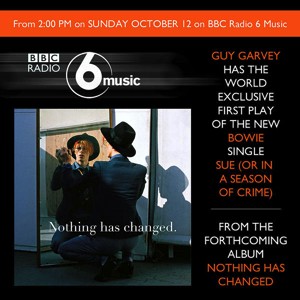 The New Elizabethans:
David Bowie. James Naughtie considers the musical influence of the man who first came to public attention in 1969 with his song “Space Oddity”, and then exploded onto the music scene in the early 70’s with his glam rock, androgynous alter ego, Ziggy Stardust.

Bowie has proved the master of reinvention, breaking into the American market in the mid 70’s with songs like “Fame” – described by Bowie as “plastic soul” -, a radical change in style and sound which confounded his UK fan base.
He then reached a new commercial peak in 1983 with “Let’s Dance” and throughout his career has continued to experiment with musical styles, including blue-eyed soul, industrial, adult contemporary, and jungle. He is widely considered to be the most unique innovator of popular culture of his era.

They were asked to choose: “Men and women whose actions during the reign of Elizabeth II have had a significant impact on lives in these islands and/or given the age its character, for better or worse.”

In this second programme (of four), there are stories about David Bowie,

Passes on Kooks by David Bowie.

David Bowie has given Guy Garvey the World Exclusive of his new single Sue, how amazing – so, it’s David Bowie Day on the Finest Hour.

According to Guy they are now best friends, we’ll see eh?

If Guy can contain his excitement this week’s theme will be tunes relating to the moon, including Moon by This Is The Kit, Canned Heats Poor Moon and Speck Mountain’s Hey Moon.

Oh and don’t forget it’s David Bowie Day on Guy Garvey’s Finest Hour, first play ever in the whole wide word of his new single – Sue, all a delicious 7 minutes and 27 seconds.

This was a 2 hour show…here we have just the bits with Bowie. 19:22 Miniutes

Bit of a cock up here with my editing skills, at the end of the show when I was editing the show down to just the Bowie bits I repeated the last section twice by mistake.