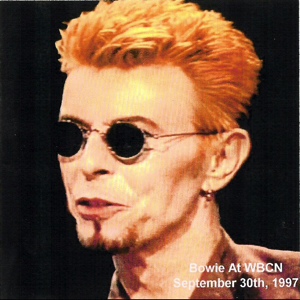 David and Reeves perform in front of a small audience in a studio and chat some with the audience. This recording is complete except the first few seconds of the track 1 introduction.
Quality is crisp and clear.track 4 has a bit of explanation from David how a riff he got from Jimmy Page many years earlier helped him put both those songs together. (yes, even David Bowie learned something from LZ’s guitarist). this was the day before the 1st of 2 shows at the Orpheum Theater in Boston, (with his full band) and there is mention of the webcast of one of those.

It was the taper his 1st ever attempt to see a webcasted concert, and he never got to see more than an occasional broken apart note. live concert webcasting was still a very primitive art in 1997 (apparently) but he later heard the shows were very good ones. Boston has always appreciated David Bowie,even playing a “secret gig” at Avalon (1996?) which I’ve never heard. 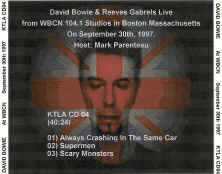