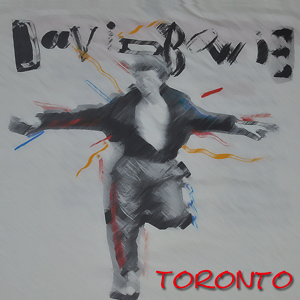 March 17, 1987, at the Diamond Club: For his Glass Spider Tour,
Mr. Bowie said he wanted a show which was “ultra-theatrical, a combination of music, theatre, and rock.” He chose Toronto to announce the tour at a mid-day press conference. After performing his new single, Day In, Day Out , and before performing his second song, 87 and Cry , the English rock star introduced his five-piece touring band, which included guitar hero Peter Frampton. “I never feel a sense of competition with myself. I finish a tour, and then I say, ’Why on earth do I do this?’ A year later I say ‘That was sort of fun, wasn’t it?’ Then after another year, I think about it a little more. The next year I’m busy writing songs for the next album and getting ready to go out again.”