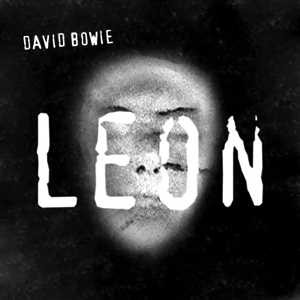 David Bowie 1994 The Leon Suites (1. Outside Outtakes) SQ 9
These demos were recorded and rejected by the record company in 1994.
The Leon Suites eventually turned into the 1. Outside album released in 1995. 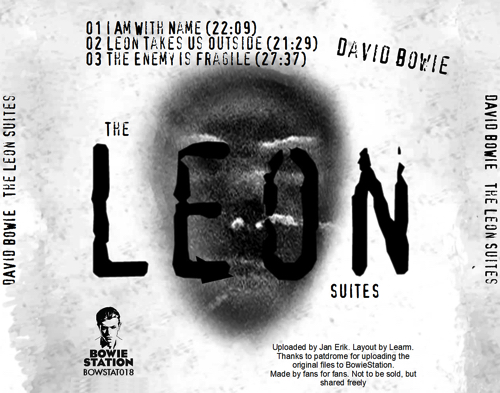 These demos were recorded and rejected by the record company in 1994.
The Leon Suites eventually turned into the 1. Outside album released in 1995.

Please visit this page for enlightening instructions to the players by Eno (also included in this edition):
http://www.moredarkthanshark.org/eno_int_rayg-oct95.html

Some quotes compiled and edited from comments gathered at bowiestation.com, with thanks to paperdragon:

I talked to one of the musicians who is on this and got a more complete story. First, these aren’t outtakes at all, and second, they weren’t initially intended to be a Bowie album.

The idea was to form a sort of supergroup behind Bowie and Eno, and record an album as a one-off project for that group. This is essentially that album.

So what we have here is a fully-realized concept album for a group that never came into existence.

It was then presented to the record company, who as we all know rejected it as “uncommercial.” After that, Bowie used parts of it as the basis for an entirely new project, which became 1. Outside. So, had this been released, 1. Outside would have never happened.

So, rather than this being outtakes from Outside, it’s actually more true that Outside was based on outtakes from The Leon Suites, an album in it’s own right.

There were five suites recorded for Leon. Two were deleted, with three receiving a final mix then being presented to the record company for release.

It’s possible that some of the outtakes came from the two other suites, which themselves became outtakes.

And that’s only talking about the Leon project.

When the record company passed on Leon, Bowie took parts of it and used them as the basis for 1. Outside. That project has it’s own outtakes.

The confusion comes in because people fail to realize that we’re talking about two separate projects, Leon and the later Outside. They tend to lump the outtakes from both together and call them all outtakes from Outside. Even this was called Outside outtakes, when in reality it’s a finished album which, if released, would have meant that Outside would never have happened.

nickfa asked –
“do you happen to also know who is playing on this album?
i imagine it’s the musicians on 1st Outside but maybe some others?”

David Bowie, Brian Eno, Reeves Gabrels, Mike Garson, Erdal Kizilçay & Sterling Campbell are the ones who got the writing credits for this so-called “Leon” tape which was recorded at Mountain Studio, Switzerland. Also these sessions were always known as Outside; the name Leon was a name given to just 1 tape which was part of the Nathan Adler series. Other tracks recorded in Switzerland were
“The Hearts Filthy Lesson”
“A Small Plot of Land”
The other tracks on 1. Outside were recorded in New York, where Carlos Alomar was added to the line up.
From all previous stuff I have read, 2 or 3 complete cd’s were rejected by several record companies, as Bowie did not have a record contract at this time. Most of the info about these so-called “Leon” tapes comes from the musicians, but accounts vary.

These were not ‘early’ sessions. These were sessions to make this album, as 1. Outside was not yet thought of. Outside only happened because this album was rejected, leading Bowie to use bits and pieces as a foundation for a new project – Outside.

As far as what was rejected – this, the 3-suite version, was intended for release as a finished album. They also discussed releasing the 5-suite version as a double album.

Goody’s additional notes:
Pitch of the source was approx. 54 cents sharp. The DC Offset of the tracks was slightly off and has also been corrected. Edits performed in Audition.

Thanks to et1 for his creative updates to the original artwork provided by Learm.
Additional thanks go out to Wolf for providing the extras included here just as I was about to share this set. They’ve been placed in an ‘Extras’ folder, as you’ll see, and are from various online sources.

RIP David. You’ve left us with a body of work that will stand the test of time!