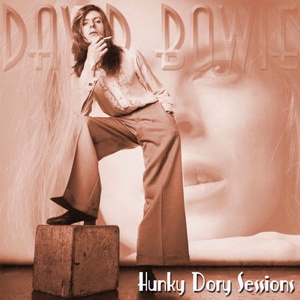 Some of the tracks are of poor sound quality but that’s only to be expected.

“Port of Amsterdam” (Jacques Brel/M.Shuman): A Bowie studio version of this Jacques Brel song (Bowie also covered “My Death”) was recorded during the Trident sessions in November 1971 for inclusion on Side One of THE RISE AND FALL OF ZIGGY STARDUST AND THE SPIDERS FROM MARS (1972). However, while eventually forming a regular part of Bowie’s live Ziggy Stardust set, it was dropped from the album line-up and released two years later as the B-side of “Sorrow/Port of Amsterdam.” (RCA 2424 – 28 September 1973). It is included as a bonus track on the Rykodisc PINUPS (1973) CD and on the CD2 bonus disc for the EMI 30th Anniversary 2CD set (2002).

“Bombers” (Bowie): According to Bowie, this semi-comic song was scheduled for inclusion on a planned (but never completed) bridging album between HUNKY DORY (1971) and THE RISE AND FALL OF ZIGGY STARDUST AND THE SPIDERS FROM MARS (1972). This bridging album was to include the songs “He’s A Goldmine”, “Bombers”, “Starman”, “Round & Round” and “Something Happens.” Three of these five songs were considered for the Ziggy Stardust album, but only “Starman” was to make it. While never slated for the Ziggy album per see, “Bombers” was officially released on the Rykodisc 1990 re-issue of HUNKY DORY (1971). In an early 1972 radio interview on songs that he still had “in the can” Bowie referred to “Bombers” as being “kind of a skit on Neil Young…” On his Heathen (2002) album Bowie covers a version of Neil Young’s “I’ve Been Waiting For You”.

“Shadow Man” (Bowie): Also titled “The Man” this song was originally recorded by Bowie at Haddon Hall in May 1970 and at Trident Studios on 23rd April 1971. A third version was recorded at Trident Studios on 14 September 1971. It has never been officially released. However, it can be readily found on CD bootlegs and is has a very similar chord structure to “Quicksand”.