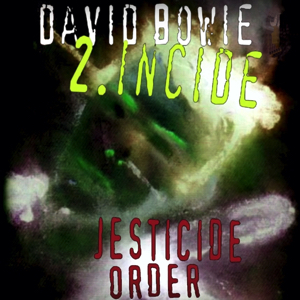 Label : No label
Audio Source : audience
Lineage : RAW
Total running time : 1:11:10
Sound Quality : very good. Equals record or radio apart from a slight noise and some dullness.
Artwork : back side Covers Not Yet Available ? , who can help me with this .?

The challenge with 2.Incide is that “Leon Takes Us Outside” is the only one of the three suites that has a viable beginning and ending. So I did the only reasonable thing I could: I found a place where I could make an inconspicuous cut, and split the track in two.

You can find other compilations of the Leon suites on YouTube, but most end with “I Am With Name,” which doesn’t really work. The song just trails off to a jittery piano while a supporting character rambles on, and it feels lacking.

“Leon” though, ends wonderfully. It gives Detective Nathan Adler (ostensibly the hero of this story) a wrap-up monologue worthy of Bowie’s acid-trip take on the pulp detective genre, and it provides as much closure on the Leon/Ramona storyline as one could hope for in this story:

She was a well-blind woman; he was a well-intentioned man: this makes for a bad end. As I said, it would end in chrome. But wait, I’m getting ahead of myself…

The last line implies a sort of circularity at play that beckons you to listen all over again. And then the song fades into a long coda that’s as beautiful as any music Bowie ever created.

I have written extensively on my reasoning for the 1.Outside order, but I may save that for another time, if this generates any interest at all.

There is, I realized, another way to reimagine the Leon/Outside music which would, in some technical sense, realize Bowie’s dream of a second Berlin Trilogy. Even excluding the 20+ hours left behind that the world may never hear, 1.Outcide and 2.Incide together are over two hours of material. It’s more than enough for three albums.

Borrowing from the partitioned format of Low and “Heroes”, you could use the three Leon suites as the Side B for three separate albums, with the songs from Outside filling out the Side A.

I tried this, and I spent a very, very long time trying to get a feel for which 4-5 tracks would go best with each suite, both playing it out on paper and then listening to the result. But I never felt like anything I came up with was better than a completely random tracklist, so I abandoned it. The idea still intrigues me, but I’ll leave the task to another Bowie fan to complete. Tell the others.