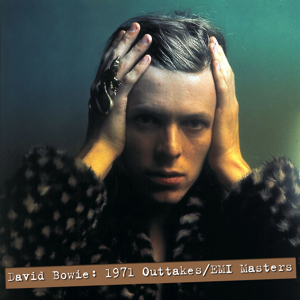 01 – Tired Of My Life .flac
The song’s a return to the folkie ruminations of Space Oddity, now with a more pronounced Crosby, Stills & Nash influence (especially in the bridge). Mick Ronson likely sings harmony.
02 – Shadowman.flac
Also titled “The Man” this song was originally recorded by Bowie at Haddon Hall in May 1970 and at Trident Studios on 23rd April 1971. A third version was recorded at Trident Studios on 14 September 1971. It has never been officially released. However, it can be readily found on CD bootlegs and is has a very similar chord structure to “Quicksand”.
03 – How Lucky You Are.flac
Another track found on the same collection of 1971 demos is How Lucky You Are, aka Miss Peculiar, in the same spurned lover mode as his odes to Hermione and anticipating Lou Reed’s Good Taste (“when you walk you follow, two steps behind”), and notable for a nagging, staccato piano motif that mutates into a repetitive foxtrot not unlike the claustrophobic, goth-disco-samba of The Chant Of the Ever Circling Family.
04 – I’ve Got Lightning.flac
Was first officially released as a bonus track on Ryko’s CD reissue of The Man Who Sold The World, which noted the track was from that LP’s sessions. However, a consensus has formed over the past decade that “Lightning Frightening” was recorded a bit later, anywhere from very late 1970 to (best guess) the Arnold Corns sessions of March-April 1971.
05 – Looking For A Friend .flac
This song was also recorded at the Trident Studio Ziggy sessions for THE RISE AND FALL OF ZIGGY STARDUST AND THE SPIDERS FROM MARS (1972). There are three versions of this song. The first (BBC radio version) had been performed by Bowie on John Peel’s In Concert radio show on 5 June 1971. A studio version (Studio Version #1) was recorded on 17 June 1971 to be the follow-up single for the Arnold Corns project (later made available as the single “Looking for a Friend/Hang Onto Yourself/Man in the Middle” Krazy Kat 12″ PAST 2 Norway (May 1985).
06 – Rupert The Riley.flac
Onto lighter fare, and we encounter Rupert The Riley, a novelty song dedicated to David Bowie’s vintage car, a 1932 Riley Gamecock, a piano-led, daft-as-a-brush, toe-tapper somewhere between the Deram albums whimsy and Oh! You Pretty Things’ deceptively jaunty catchiness, as well as featuring a “beep-beep” refrain that also resurfaced in 1980, on the hit single Fashion
07 – Rupert The Riley (with effects) .flac 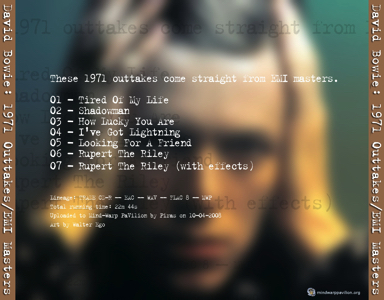