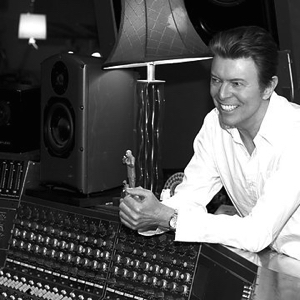 In Time review; David Bowie in the 70s
Front Row

David Bowie’s influence in the 1970s, his most productive decade, is the focus of a new book by Peter Doggett. He charts how the music developed through the decade, and reflects on why Bowie’s difficult background, including the shadow of a ‘family curse’ of madness, led to pioneering and experimental personas.

Tony Parsons, Miranda Sawyer and La Roux’s Elly Jackson discuss David Bowie’s music and influence, in the light of his new album The Next Day.

As the Victoria and Albert Museum prepares for a major David Bowie retrospective exhibition, John visits the Museum’s store-rooms to see sketches, costumes and instruments, drawn from Bowie’s personal archive.
John’s guides are designer Jonathan Barnbrook, who is involved in the exhibition and the new album artwork, and curators Victoria Broackes and Geoffrey Marsh.

John also draws on his own archive of interviews with David Bowie, including a recording from 2002 where Bowie discusses his influences, the experience of growing older, and how writing can sometimes be a traumatic experience.

David Bowie Interview, 2002,
John Wilson talks to David Bowie in New York. This is an uncut version of the interview which was first broadcast on Radio 4’s Front Row in June 2002.

But there’s always David Bowie – he never lost control, and tonight Night Waves takes stock of the man who sold the world as a new exhibition ‘David Bowie is….’ gets set to open at the Victoria and Albert Museum later this week.

David Bowie and Iggy Pop:
The BBC’s archive is justifiably and inarguably world-famous, but most of this attention and praise is showered on the riches contained within the Beeb’s music archive – the life-changing Peel performances, seminal sessions from Jimi Hendrix, Led Zeppelin and David Bowie.

As long as there have been pop stars, the BBC has spoken to them. Marc Riley and his trusty Time Machine – a rickety rust-bucket, back-firing jalopy – travel back through the years to visit the great and the good, the famous and the infamous, safely ensconced within the treasure trove of the BBC archive. Marc replays candid snapshots at crucial points in the careers of some of the biggest names in music.

In each episode, Marc lines up the Time Machine to travel to two different points in time and revisit two interviews with something in common – a person or place, a shared influence or ideology, a discovery, a misunderstanding.

In this first episode, the interviews share a geographic connection – Berlin. David Bowie, in conversation with Radio 1’s Stuart Grundy from 1977, explains why the city was so good for his creativity.
The second interview comes from 1990 when Iggy Pop spoke to Nicky Campbell about how he hooked up with Bowie and offered another perspective on their time together in Germany.