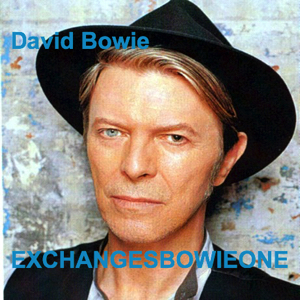 Bowie contributed to many recordings by other artists; as composer, performer and/or producer. This is a compilation of those “side tracks”.

01 – Oh baby: This UK single sold poorly. Fans found out too late about the true identity of the artists…
Dib Cochran: Tony Visconti (vocals, guitar, autoharp)
The Earwigs: David Bowie (vocals), Marc Bolan (guitar, vocals), Rick Wakeman (piano), Micky Finn (percussions). Apparently, the Earwigs were not involved in the making of the B side (Universal Love).

02-05 – Along with The Hype, one of Bowie’s early attempts at what will become The Spiders From Mars.
Arnold Corns aka Rudi Valentino (vocals): real name was Freddie Buretti (a clothes designer).
Runk: David Bowie (vocals, guitar), Mick Ronson (guitar), Mark Carr Prichard (guitar), Trevor Bolder (bass), Woody Woodmansey (drums).
Although he was sharing the lead vocals with David, it seems like Arnold’s voice got lost in the mixing process for the first single; which may explain why only these two songs (02, 03) have since been re-issued as CD bonus tracks (Ryko’s The Man Who Sold The World & EMI’s Ziggy Stardust 30th anniversary edition). Note: the lyrics of this early version of Hang On To Yourself show some similarities with those of Lou reed’s Sweet Jane (see 07).

06-07 – As Bowie produced the whole (first) album by Mott The Hoople, All The Young Dudes, only two tracks were selected here: one because written by Bowie and released on single; the other (vinyl rip) because Bowie insisted Mott The Hoople recorded Sweet Jane, as he was a great admirer of Lou Reed.

08-10 – Finally, Bowie got to meet (the real) Lou Reed and produced his Transformer LP. Bowie’s contribution (and influence) is clearly heard on the three tracks selected here.

14-18 – In those two Mick Ronson albums as re-released on CD (including bonus tracks: see 18), Bowie’s involvement was limited to four tracks, as writer only. Reportedly, White Light White Heat, recorded in ’73 during the Pin Ups sessions; was used as basic track by Mick in ’74 (hence David in backing vocals).

19-21 – In mid 1971, a GEM (management) promotional LP was pressed, containing Bowie’s tracks (including It Ain’t Easy, recorded 9 July ’71 at Trident Studio) on side A. Songs by Dana Gillespie filled the B side. On the two tracks produced by David Bowie & Mick Ronson, she was backed by the musicians of the Hunky Dory album: Bowie, Ronson, Wakeman, Bolder, Woodmansey. The two tracks re-surfaced on her commercial LP along with another Bowie composition, Backed A Loser (produced by Dana Gillespie and Robin Cable).

22 bonus track – Like many others since the Beatles, Mott The Hoople did not escape the grotesque Anthology craze in which 2/3 of the “previously unreleased material, finally to be enjoyed by all” has been tempered with in some way or other before release (when not mutilated beyond recognition). This is a good example: here, Bowie’s guiding vocals (verses only) are mixed with Mott’s released version (chorus).
You’ve got half of what you’re looking for: enjoy your frustration!
(still, we can hear the bit after the fade-out)