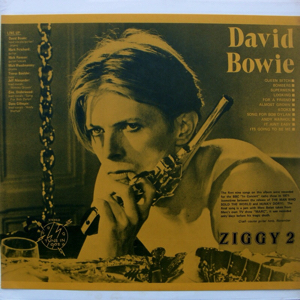 DJ John Peel introduces the songs end gives the audience some information on Bowie.
The audience in the studio is limited and there is soft clapping after each song.

‘Queen Bitch’ fades in to start the show but the source tape is playing at a slightly slower speed than normal, so the track is slightly slow and features a skip on the vinyl halfway through. ThesoundresumesitscorrectspeedafterthattrackandalthoughBowiesvocals are very clear, the overall sound is quite bass heavy and muffled. ‘Almost Grown’ features ‘Geoffrey Alexander’, who later became ‘Geoffrey McCormack’ and ‘Warren Peace’ and George Underwood supplies vocals for ‘Song For Bob Dylan’ . Bowie says that he wrote ‘Andy Warhol’ for Dana Gillespie and she sings the track here and it’s a superb version with outstanding guitar work from Mick Ronson. 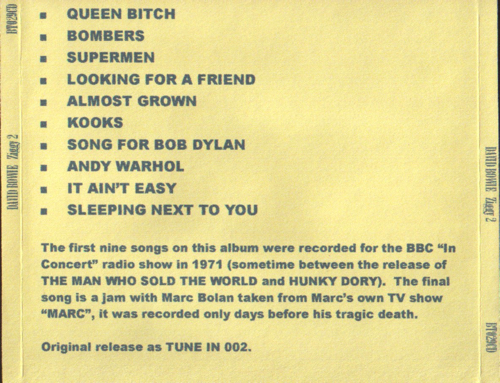 The first nine tracks from the John Peel In Concert recording, from Paris Studio: recorded 3rd June 1971 and broadcast on the 20th.
The final track’s from the Marc TV show, 9th September 1977 (sneeze and you’ll miss it).

REVIEW BY STEVEHAWK
A funny gig from BBC’s “In Concert” series, with Bowie and a couple of friends singing their favourite songs as well as songs from the coming album HUNKY DORY. A very interesting version is ANDY WARHOL sung by Dana Gillespie! The sound quality is normal. The last song is from the TV show Marc, and is very short.