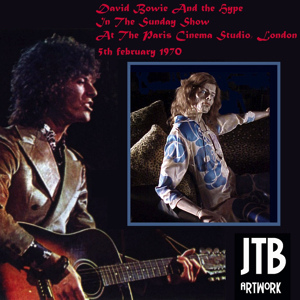 In February 1970, David Bowie required a more permanent band to back him for the promotion of his latest album, ‘David Bowie.’ John Cambridge was retained from the ‘Space Oddity’ recording session and Tony Visconti volunteered for bass guitar duty. Cambridge recommended his friend Mick Ronson as guitarist.

In the March 28, 1970 edition of Melody Maker, Bowie stated “I’m very happy with the band, I have Tony Visconti who has played bass on nearly all my records, John Cambridge who used to be with Juniors Eyes and Mick Ronson on guitar and I play 12 string guitar. Although we’re all happy with the set up I can’t see it becoming a really permanent thing. I want to retain Hype and myself as two separate working units whereby we can retain our own identities. We’ve had these costumes made by various girlfriends which make us look like.” I was a bit apprehensive about wearing them at the Roundhouse gig because I didn’t know how the audience would react. If they think it’s a huge put on, the whole thing will backfire, but they seemed to accept it which was nice.”