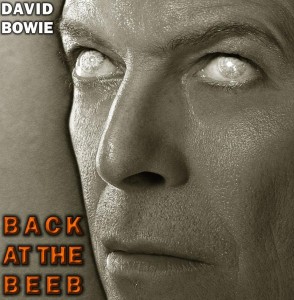 David Bowie played an exclusive gig for less than 100 people in London – and filmed the show for his young daughter.
The 55-year-old performed the special gig at the BBC’s Maida Vale studios in west London, which was recorded for a Radio 2 special to be broadcast next month. He performed the track Bewlay Brothers – from his 1971 album Hunky Dory – live for the first time, but had to use lyric sheets to keep up, because, he said, “there are more words in this than War and Peace”. Bowie used a hand-held camera to capture parts of the show for his two-year-old daughter Alexandria back home with his wife Iman in New York. “This is just to show my daughter exactly what sort of person I associate with,” he said, focusing his lens on the fans.
Of the 10 songs he played, most came from his recent Heathen album. But he also played Bertolt Brecht and Kurt Weill’s Alabama Song – which was a single in 1980 – and Look Back in Anger from the Lodger album. He also played 1974 single Rebel Rebel, telling the audience: “This is one that I said I’d never play again – and true to my track record, here it comes.”