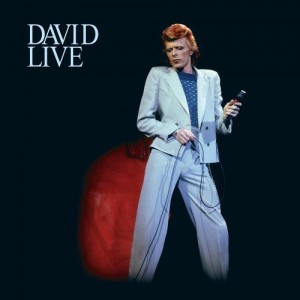 David Live is David Bowie’s first official live album, originally released by RCA Records in 1974. The album was recorded in July of that year, on the initial leg of Bowie’s US Diamond Dogs Tour, at the Tower Theater in Upper Darby, PA, a suburb of Philadelphia. (The second leg, a more soul-oriented affair following recording sessions in Philadelphia for the bulk of Young Americans, would be renamed ‘Philly Dogs’.) 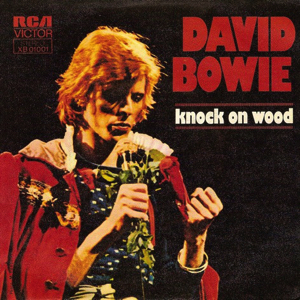 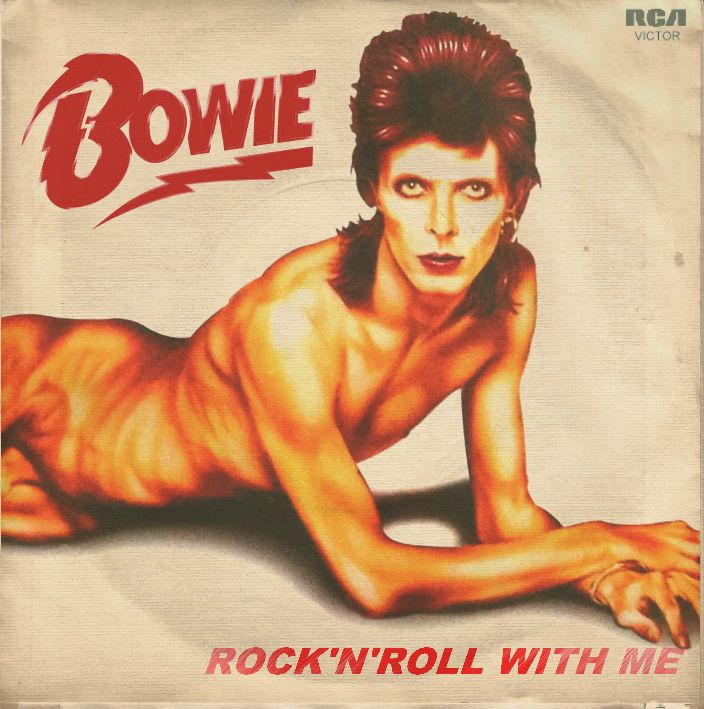 Rock ‘n’ Roll With Me” is a song written by David Bowie and Warren Peace and recorded in January 1974 that first appeared on Bowie’s Diamond Dogs album, supposedly to address the artist’s complex relation with his fans. A version recorded during the Diamond Dogs tour in July 1974 was released on the album David Live.

While the song “Knock on Wood” from David Live was issued as a single in the UK, “Rock ‘n’ Roll With Me” was chosen for release as the US single in response to Donovan’s recent cover version. The B-side in each case was another live recording from the Diamond Dogs tour, “Panic in Detroit”, originally from Aladdin Sane (1973).

Like “Rebel Rebel”, the lead single from Diamond Dogs, “Rock ‘n’ Roll With Me” was conceived as part of a never-produced Ziggy Stardust musical in 1973. It has been described as “one of Bowie’s least self-conscious love songs” and a foretaste of the R&B balladry on Young Americans (1975).

The Tower Theatre shows on 14 and 15 July were nearly cancelled at the last moment when Bowie’s backing band, after hearing the news that the shows were to be recorded for an LP, refused to play without an increased fee in line with the normal recording rates. The normal show fee of $150 for a member of the group was increased to $5,000 after Bowie relented.
David Live was recorded without Tony Visconti who was held up when his car broke down travelling from New York. Engineer Keith Harwood was left to do the job alone and the microphones were not placed according to Visconti’s instructions. As a result various instruments were not isolated properly thus making the tracks much more difficult to mix.
The mixing was done a few days after the Philly shows by Bowie, Tony Visconti and Eddie Kramer at Electric Lady studios in New York. Some of the backing vocals had to be re-recorded due to loss of microphone contact during the shows.
The whole post production process was done in haste as DeFries wanted to secure the record’s release for the Christmas market.

The Sweet Thing / Candidate / Sweet Thing (Reprise) suite was originally from David Bowie’s 1974 album, Diamond Dogs. It was subsequently performed on the 1974 tour, and was included on the David Live album.

Many agree that the studio version of the Sweet Thing suite, from Diamond Dogs, is one of the finest things Bowie ever produced. Chris’s essay is really the last word on this musical masterpiece, so I’ll spare you my artless list of superlatives. However, I do feel inclined to say that Diamond Dogs was the first Bowie album I truly loved, from when I first became a fan, at about 12 years old. And the Sweet Thing suite was even then for me the obvious standout. Musically it appeared to me then, as now, something truly outstanding. And in my opinion it must contain one of Bowie finest vocal performances.

So then we get to the live performances. David Live was a disappointment to me, principally because I thought the versions of the Diamond Dog material did not match up the originals. But I got over that, and began to enjoy the ’74 live material judged on its own terms.

And so it is with this live version from the L.A. Forum, that thankfully we have, in decent quality, due to the BBC who recorded and presumably mixed it.

Making this edit, I’ve listened to this performance for many hours, and I’ve grown to love it.

The playing is great, by all concerned. Particular mention must go to Mike Garson, who’s piano leads the way. His playing is beautiful here, grandiose in places, but equally nicely retrained elsewhere. It’s jazzy, but also solidly rocking out.

I’m guessing Bowie knew he could never scale the vocal heights of the studio version, so he wisely limits himself. But within those limits he really excels, I think. Listen to the touching way he sings, at 2:45 “I’m in your way, and I’ll steal every moment, yeah”.

Compared to the studio version, the Candidate section takes much longer to start stomping it’s feet. But once it gets going, it’s great. And the finale of Candidate is electrifying,

As I wrote in the notes for “Cracked Actor – Live ‘74”, the video footage is (apart from Earl Slick’s guitar solo) is from the wonderful 1974 Alan Yentob BBC documentary, Cracked Actor. The in-concert material it contains is really well filmed, as one would expect from the BBC. Unfortunately, however it contains no complete song. Therefore some imagination and technology was required.

As I began the job of trying to reconstruct the suite in it’s entirety, despite there only being about half of it featured on the “Cracked Actor” documentary, I quickly came to realize the brilliance of Yentob’s idea of using the scenes of Bowie in the limo, cruising the streets at night. Merely the footage of Bowie high-up, on a fairly distant stage scaffolding, is perhaps not that interesting. Therefore interspersing it with those limo / street scenes, that are so evocative of the feel and the lyrics, was a great move.

And so I just expanded on that idea. And as I worked, something occurred to me. There is I think a big similarly in the footage and the vibe of Yentob’s Sweet Thing sequence, to Martin Scorsese’s 1976 movie, Taxi Driver: A paranoid drug addict, driving around seedy looking neon-lit streets at night, distanced / aloof / alone. And furthermore, the jazz of Mike Garson and David Sanborn’s playing is similar to Bernard Herman’s score and Tom Scott’s sax playing on the Taxi Driver soundtrack.

Interestingly, Yentob’s Cracked Actor, predates Taxi Driver by at least a year and a half. Which leads one to wonder – was Scorcese influenced by Cracked Actor? After all, another famous underground movie director of the day, Nicolas Roeg saw Cracked Actor. We know that because he says that after watching it, he knew immediately that he had found his alien, to star in The Man Who Fell To Earth.

So anyway, I hope you will forgive me for indulging myself in making this video a kinda mini homage to Taxi Driver?

I do hope, those lovely people at the BBC will look kindly on this video, and my humble efforts with their fine material, and allow this video to remain published here on my YouTube channel.

Hope they, and you dig it!

Do me an’ yerself a favor – watch it in HD with the sound UP LOUD!

If anyone has any other footage, or ideas for another video project, of material from Bowie’s classic period, do please get in touch: [email protected]

Putting this video together was another huge labour of love, made with love and with respect for the source.

I don’t own the rights, and I’m not making any money out of this etc. Just a fan making videos for other fans.

Cracked Actor was originally a song from David Bowie’s 1973 album, Aladdin Sane. It was subsequently performed on the 1974 Diamond Dogs tour, and was included on the David Live album.

Like most of the older material played on that tour, Cracked Actor was rearranged to suit Bowie’s new “Soul Man” direction. Some of the rearrangements fared better than others, in my opinion. In the case of Cracked Actor, I love what they did with it, especially when the performance aspect is seen.

“For the 1974 Diamond Dogs tour Bowie removed “Cracked Actor” from its back-room origins and staged it entirely within an actor’s fevered mind: he wore a cape and sunglasses and sang to a skull in his hand, a la Hamlet, then French-kissed the skull… A curse on Los Angeles, “Cracked Actor” would rebound on Bowie: it became the title of a 1974 documentary chronicling Bowie living in LA at his lowest state, reduced to a jittery husk of a human being.”
– Chris O’Leary, from his superb blog, Pushing Ahead of the Dame https://bowiesongs.wordpress.com/?s=Cracked+actor

I have been asked many times to create some videos for Bowie’s ’74 tour. There is very little material available, but I have gathered all the footage that’s out there, I think. Among the Super 8 stuff there are some possibilities, tho’ a lot of labor will be required.

In the meantime, I’ve taken the obvious easy road of first working on the footage from the 1974 Alan Yentob wonderful BBC documentary, Cracked Actor. The in concert material it contains is really well filmed, as one would expect from the BBC. Unfortunately, however it contains no complete song.

Therefore some imagination and technology is required. Here, I am more or less retreading what others have tried before, but not at this quality.

I do hope, those lovely people at the BBC will look kindly on this video, and my humble efforts with their fine material, and allow this video to be published here on my YouTube channel.
Hope they, and you dig it!

Do me an’ yerself a favor – watch it in HD with the sound UP LOUD! 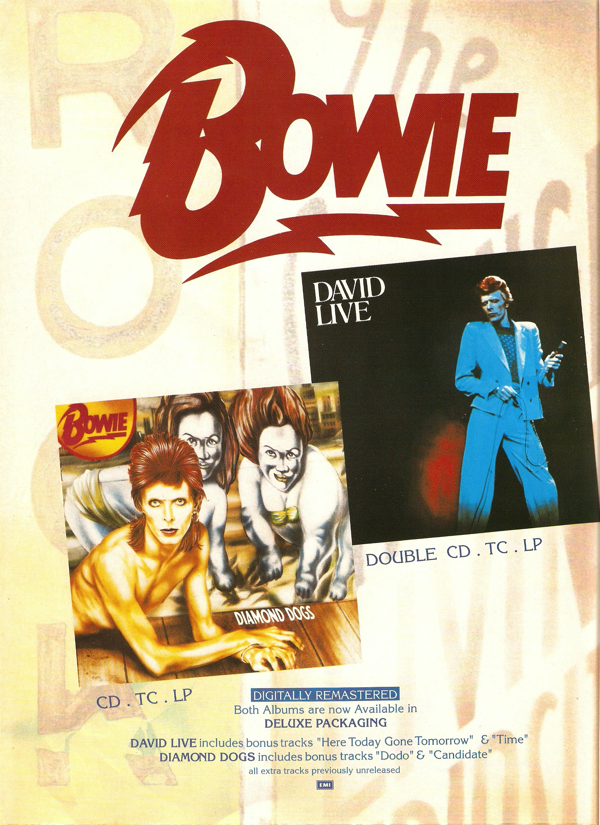 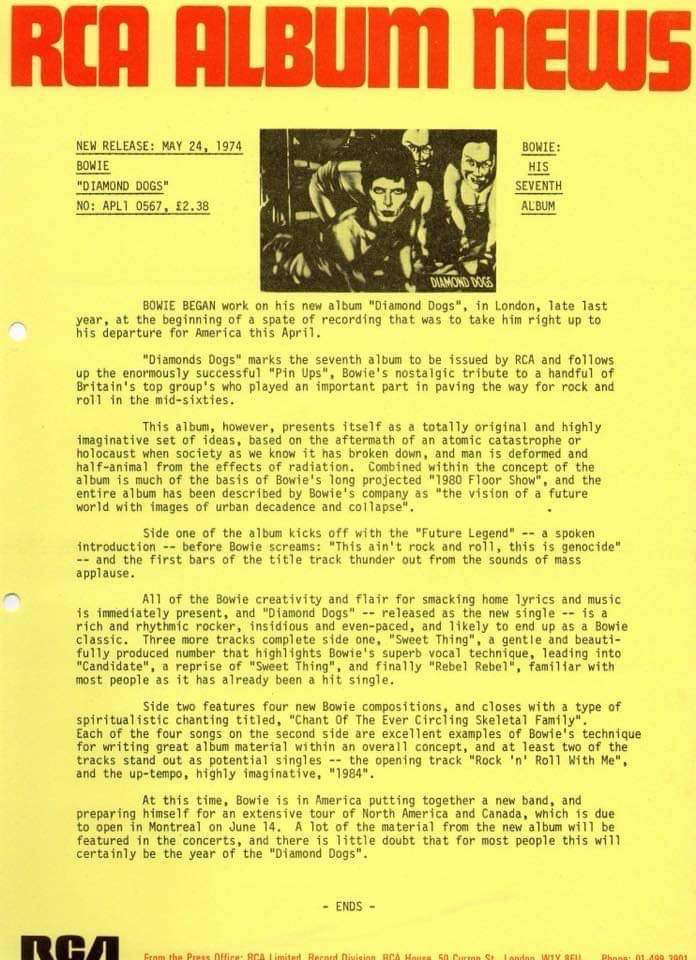