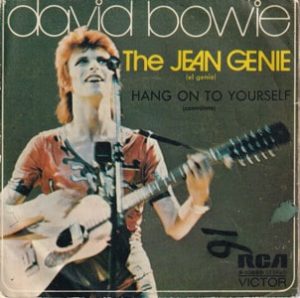 “The Jean Genie” is a song by English singer-songwriter David Bowie, originally released in November 1972 as the lead single to his 1973 album Aladdin Sane. Co-produced by Ken Scott, Bowie recorded it with his backing band the Spiders from Mars − comprising Mick Ronson, Trevor Bolder and Mick Woodmansey. According to Bowie, it was “a smorgasbord of imagined Americana”, with a protagonist inspired by Iggy Pop, and the title being an allusion to author Jean Genet. One of Bowie’s most famous tracks, it was promoted with a film clip featuring Andy Warhol associate Cyrinda Foxe and peaked at No. 2 on the UK Singles Chart.

side B. Hang On To Yourself = Contrólate 3:35
Producer – David Bowie, Ken Scott

On the backcover the publishers are different: Vaudeville Music Ltd. for A side and Tantric Music for B side which probably is a left over from the original release David Bowie – The Jean Genie = El Genio.