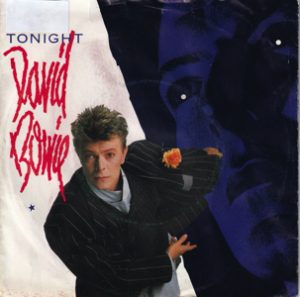 Bowie re-recorded the song with guest vocalist Tina Turner in 1984 for his album of the same name. The song was recorded as a duet but the single was only credited to Bowie. The original spoken word introduction of the 1977 version, establishing that the lyric is addressed to a lover dying of a heroin overdose, was excised from Bowie’s version because Bowie regarded the introduction as an “idiosyncrasy” of Iggy Pop that did not match his own personal vocabulary. Bowie also stated that he didn’t want to “inflict” that part of the song on Tina Turner, either. The reggae-flavoured song reached number 53 on the UK 32

Tracklist
side A. Tonight 3:42

Tina Turner and David Bowie live versionDavid Bowie would perform the song live with Tina Turner at the latter’s 23 March 1985 concert at the National Exhibition Centre in Birmingham. This version was included on Turner’s live album Tina Live in Europe three years later, and also released as a single in late 1988, then becoming a number-one hit in the Netherlands.