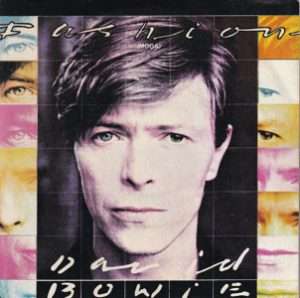 “Fashion” is a track from the 1980 album Scary Monsters (And Super Creeps). It was released as the second single from the album and was accompanied, like its predecessor “Ashes to Ashes”, by a highly regarded music video.

Music and lyrics
According to co-producer Tony Visconti, “Fashion” was the last song completed in the Scary Monsters sessions, its bassline and some of the melody taking inspiration from Bowie’s 1975 hit “Golden Years”. Guest guitarist Robert Fripp contributed a series of harsh, mechanical riffs to complement the band’s funk/reggae arrangement.

The track was noted for its emotionally vacant choir effect, and the recurring onomatopoeia “beep beep” that Bowie had first used in an unreleased 1970 song called “Rupert the Riley”. Another phrase in the lyrics that Bowie borrowed from his past was “People from Bad Homes”, the title track of a 1973 album he recorded with his protégés The Astronettes, which went unreleased until 1995.

References to a “goon squad” coming to town provoked theories that the song actually concerns fascism (“the National Front invade the discos”, inferred NME critics Roy Carr and Charles Shaar Murray). However Bowie played down this interpretation in an interview shortly before the release of Scary Monsters, saying that what he was trying to do was “move on a little from that Ray Davies concept of fashion, to suggest more of a gritted teeth determination and an unsuredness about why one’s doing it”. Biographer David Buckley believed the song “poked fun at the banality of the dance-floor and the style fascists” of the New Romantic movement.

Music video
David Mallet shot a music video for the single “Fashion” in a famous nightclub owned by his friend Robert Boykin called Hurrah. The opening shot of the clip features David Bowie on the HURRAH stage which was draped in khaki canvas for this shoot. The faceted mirror walls surrounding the dance floor can be seen in the background of various shots, and all the band scenes are shot in this club setting. Other locations around Manhattan are intercut throughout the clip. Amid a series of facial contortions and other gestures, Bowie made use of a move he had employed in the “Ashes to Ashes” video: slowly crouching and bringing his arm down to the ground in a slow vertical arc. Record Mirror readers voted “Fashion” and “Ashes to Ashes” the best music videos of 1980.

The video features Carlos Alomar, G.E. Smith (Hall & Oates), Khandi Alexander, the guitarist Steve Love who plays drums in the video, John Kay, May Pang (married the songs producer Tony Visconti) and Alan Hunter, who became one of the first MTV VJs and also the first VJ to appear in the music video.

Release and aftermath
“Fashion” was the second single from Scary Monsters and the first issued after the album’s September 1980 release. The edited 7″ cut reached No. 5 in the UK, and by hitting No. 70 in America gave Bowie his first chart single there for four years. The UK sleeve design was adapted for the cover art on the 1980 compilation Best of Bowie. Bowie has performed the song on several tours, and it is included in the 1983 concert film Serious Moonlight. It was featured in the movie Clueless. During the Closing Ceremony of the 2012 London Olympics, “Fashion” was used during a tribute to the British fashion industry in a parade that featured a number of top models from the UK.